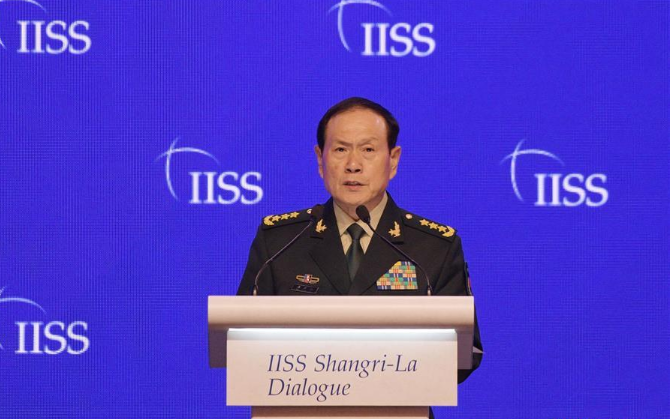 SINGAPORE (Xinhua) -- Chinese State Councilor and Defense Minister Wei Fenghe said here on Sunday that China and the United States should follow the consensus by the two heads of state and promote a China-US relationship featuring coordination, cooperation and stability.

This year marks the 40th anniversary of the establishment of diplomatic ties between China and the United States, and the bilateral relationship grew steadily in the past 40 years, despite all the ups and downs, said Wei in a speech at the 18th Shangri-La Dialogue.

"The most valuable lesson we have learned from the four-decade-long relationship is that cooperation benefits the two sides while confrontation hurts both," he said.

The Chinese minister said the militaries of the two countries have agreed on many important issues through continued communication, including agreements on making their relationship a stabilizer for the overall relations, and maintaining regular communication on the strategic level.

Wei said that he had a candid and practical discussion with US Acting Secretary of Defense Patrick Shanahan on Friday, and they reaffirmed the importance of maintaining communication and developing a constructive military-to-military relationship.

In terms of managing risks and preventing conflicts, Wei said China and the United States recognize that military conflicts or even a war between them would bring disasters to both countries and the world.

"It takes two to cooperate, but only one to start a fight," he said. "We hope that the US side will work with us towards the same goal, follow the principles of non-conflict, non-confrontation, mutual respect and win-win cooperation, and steer the China-US relations in the right direction."

Wei leads the Chinese delegation at the 18th Shangri-La Dialogue, which opened Friday to discuss the security situation and challenges in the Asia-Pacific.

Officially known as the Asia Security Summit, the Shangri-La Dialogue has been organized and convened annually by the British think tank International Institute for Strategic Studies and the Singaporean government since 2002.