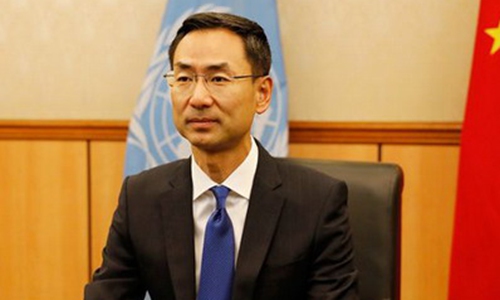 As the Ukraine-Russia conflict is still raging on, the flames of fighting still spreading, and the prospect for a peaceful settlement not yet in sight, said Chinese Ambassador Geng Shuang at the UN General Assembly (UNGA) Emergency Special Session on Ukraine on Wednesday, what is urgent now is to guide the parties concerned to exercise restraint, avoid escalation of conflicts, prevent the confrontation from getting out of control and deescalate the situation.

Chinese delegation abstains from voting on the draft resolution, condemning the "Russian referenda in four territories in Ukraine and their joining the Russian Federation." Geng pointed out that the GA, as the most representative organ of the UN, should play an active and constructive role on the issue of Ukraine by bridging differences and forming consensus, garnering the greatest synergy for peace talks and finding the greatest common factor among member states.

"The draft resolution submitted to this emergency special session for voting will not help achieve the above-mentioned objectives. Therefore, the Chinese delegation will abstain,"he said.

Geng stressed that the crisis is getting increasingly protracted, expanded and complicated, and its spillover effects further penetrating to and affecting economy and people's livelihood.

In this regard, Geng made four points about China's position on the issue.

The international community must encourage the parties concerned to relaunch peace talks as soon as possible, incorporate reasonable concerns into negotiations, put feasible options on the table, and create conditions and space for the cessation of hostilities and settlement of the crisis.

Second, it is important to increase humanitarian relief and alleviating the plight of the civilians affected. He stressed that China commends Ukraine's neighboring countries for hosting millions of refugees, and supports the UN and international humanitarian agencies in assisting Ukraine and helping share the burden of its neighbors based on the principles of humanity, neutrality, impartiality and independence.

"We call on all parties concerned to exercise restraint and prevent any occurrence of irreparable humanitarian disaster," Geng noted.

Third, strengthening solidarity and cooperation to minimize the spillover effects of the conflict is the key to settle the situation. "All-out and indiscriminate sanctions will not help solve the problem," Geng said. "Instead, they will only disrupt the stability of global supply and industrial chains, amplify the spillover effects of the crisis, and affect the normal life of the people around the world."

Fourth, all parties concerned should abandon the Cold War mentality and prevent the world from falling into division. "The crisis in Ukraine shows once again that clinging to the Cold War mentality and bloc politics, creating bloc confrontation, and pursuing absolute security will not bring peace, but will only lead to conflicts, which serves no one's interests," he said.

"We must draw lessons from history, reject division and confrontation, uphold solidarity and cooperation, practice multilateralism, and jointly safeguard the international system with the UN at its core and the international order based on international law, with a view to promoting world peace and development," Geng noted.

The Chinese delegation wishes to point out that the work of the GA should be conducted in full accordance with the rules of procedure and should reflect fairness and impartiality, said Geng. "With regard to procedural issues, the views of Member States should all be fully expressed, and their motions should all be given equal weight."