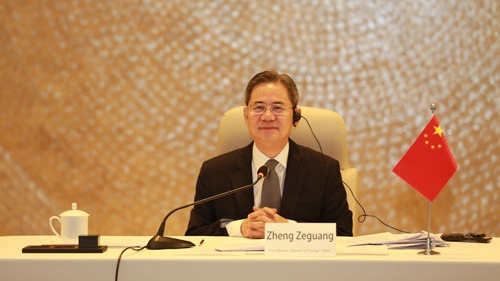 Relations between China and the United States are at a crucial juncture, and efforts must be made to maintain and stabilize bilateral ties, Chinese Vice Foreign Minister Zheng Zeguang said on Thursday.
Zheng made the remarks during a dialogue via video link with a group of U.S. Congress members, including Ami Bera, chairman of the House Foreign Affairs Subcommittee on Asia, the Pacific and Nonproliferation, and Ted Yoho, who also sits on the subcommittee.
Chinese State Councilor and Foreign Minister Wang Yi warned last month that China-U.S. relations were facing the most serious challenges since the establishment of diplomatic ties in 1979.

Zheng urged U.S. politicians to stop making negative remarks or behaving in ways that would harm bilateral relations, calling for joint efforts to bring China-U.S. ties back on the right track. 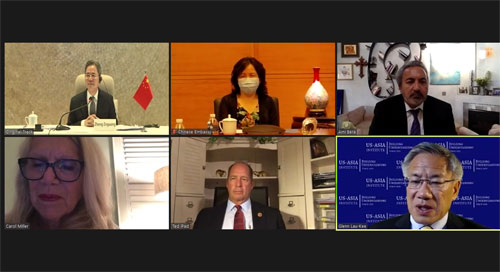 The United States should immediately stop slandering China and create conditions for the two countries to cooperate in the fight against the COVID-19 pandemic, he said, adding that China sincerely wishes the U.S. could defeat the coronavirus at an early date.
However, Beijing firmly opposes Washington's attempts to stigmatize China or shift blame to China over the virus, he noted.
The number of confirmed COVID-19 cases in the United States has surpassed 5.3 million, and more than 169,000 people have died, according to data released by Johns Hopkins University. Both numbers are the highest among countries in the world.
Zheng criticized the U.S. for its unilateral provocations as well as remarks and behaviors that interfered with China's internal affairs, harmed Chinese interests and seriously damaged bilateral ties in recent months.
People from both sides should take action to stop a handful of American politicians from damaging bilateral ties for their personal interests, the diplomat said.
"We are committed to developing a China-U.S. relationship featuring non-conflict, non-confrontation, mutual respect and win-win cooperation," he said. "At the same time, we will safeguard our sovereignty, security and development interests."
Bera and other House representatives attending the dialogue said U.S.-China relations matter greatly to the two countries and the world and that the two sides should take effective measures to manage their differences while expanding cooperation on epidemic control and trade.
The dialogue was co-hosted by the Chinese People's Institute of Foreign Affairs and the U.S.-Asia Institute.