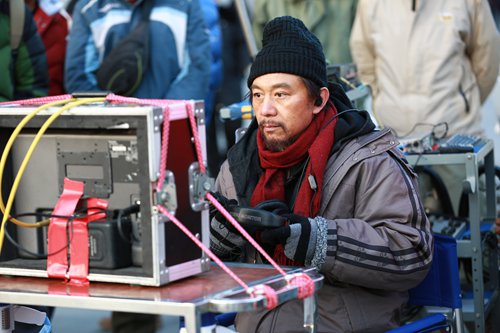 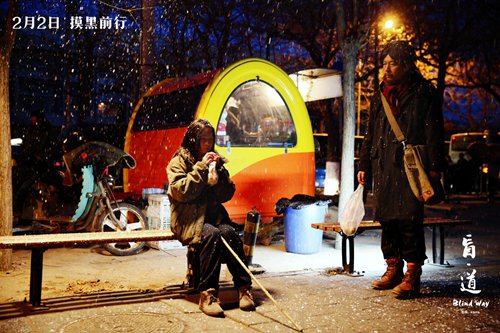 After struggling for a decade to finish his trilogy, award-winning director Li Yang finally saw the release of Blind Way nationwide in China.

"This is an unsatisfactory work," Li Yang told the Global Times in an exclusive interview, "but I am satisfied that it finally got permission to be shown in nationwide theaters."

Film censorship is loosening, according to Chinese media reports that note movies about the Vietnam War and Cultural Revolution have appeared in Chinese mainland theaters. But Li still needed to fix his film under Chinese regulations.

"I never met or knew those who censored my film," Li says. "I wanted to have a direct discussion with them to explain the scenes in my film, yet all I got were demands to cut some scenes without explanation."

Blind Way features a blind girl, Jingjing, played by Du Hanmeng, who is bought by human traffickers and forced to beg on the streets.

The movie delves into child abuse, sexual assault and children street beggars. It is the last work of Li's Blind trilogy, which includes Blind Shaft and Blind Mountain.

After a few advance screenings, fans of Li expressed disappointment with his third work, saying the film lacked his usual edge.

"Really regret attending the premiere of Blind Way. Probably no one would expect the trilogy of Li Yang to end like this," internet user Qingcheng posted on Douban, giving the film one out of four stars.

"Even though [the film] still focuses on the bottom of society, it seems hardly a work of Li Yang. He was the master with a sharp sword who once shot Blind Shaft and Blind Mountain. The warm theme of the film was not well executed with poor performances, weak dialogue and an embarrassing underscore. Even the stories, which Li was good at, were not well told," wrote filmgoer Bc&L.

The 2003 crime feature Blind Shaft was not allowed to be released on the Chinese mainland and Li had to stop filming for three years. Blind Shaft, based on real-life events about coal miners who conspire to kill co-workers and obtain pensions from mine owners, proved Li's breakthrough work: The film won overseas awards, including the Silver Bear for Outstanding Artistic Achievement at the Berlin International Film Festival.

To make a movie about street children was on Li's to-do list for a long time. He had noticed them begging and committing crimes in cities more than 10 years ago and even interviewed them.

"I think there should be a film in China that cares about these children," he told the Global Times.

The number of street children on the Chinese mainland was more than 150,000, Worker's Daily reported in 2012, as cited by xinhuanet.com. A report on sohu.com the same year said most of the children had little education, many had suffered sexual assaults and were controlled by gangs.

Li experienced 10 years of obstacles and failures, he says, in making Blind Way, including censorship, shortage of funds and the lead actor quitting.

Li almost quit himself, but finally found the will to finish after his mother suffered a stroke. She was paralyzed and later lost the ability to speak.

"I then realized the uncertainty of life," says the director, 59.

Li is well aware of the criticism being thrown at Blind Way. "It doesn't matter how much content was omitted, but the importance of these scenes to the whole film," he says.

Censorship is a weak excuse for a film failing at the China mainland box office, Li's harshest critics will say.

But Li said that he knows how to make a commercial success, and he can prove it: Li worked as a scriptwriter on Hark Tsui's 2014 box office smash The Taking of Tiger Mountain.

From now on, Li says, he will work on more commercial films that cater better to the Chinese mainland market.

Despite all the likes and dislikes, audience member Shisige Sichongzou said: "just like the society we are living in, even it has various illnesses. It can protect us and we can now live a peaceful life. One single film cannot be used as the criteria of a director."

"It has now become habitual thinking that once a film touches some sensitive topics but turns out dissatisfying that censorship will be the first thing blamed," says an industry insider who asked to remain anonymous. "Look at the bigger picture and you will find the answers."