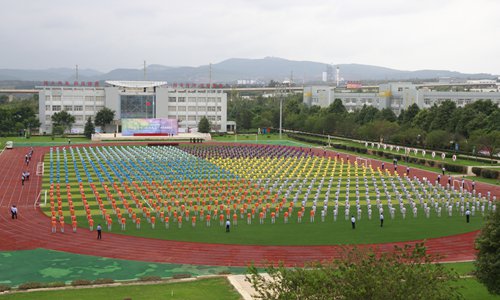 Clad in the mandatory drug rehab center's uniform of a grey short-sleeved top, Liang and his fellow inmates spin on the dynamic bicycle to rhythmical background music. It's part of the cutting-edge sports-based drug rehab method being piloted in China. Six months ago, the uniform was too loose and saggy for Liang, who had been so weakened by drug abuse that despite being 1.76 meters tall, he weighed only 60 kilograms.After three months of physical exercise rehab, coupled with a healthy diet and instruction from professional experts who regularly visited the facility, he now weighs 75 kilograms.This was the scene presented to nearly 100 global experts and delegates who had come to visit the Fifth Compulsory Isolation and Drug Rehabilitation Center in Southwest China's Yunnan Province. They were there to witness China's efforts to use innovative means to help addicts kick their habits, including virtual reality (VR), artificial intelligence (AI) suicide risk assessment system, AI depression assessment system, music intervention therapy, and yoga rehabilitation training.Before stepping on the bicycle, Liang first approached the big screen command system to log in using a smart facial recognition tool. He then got his personalized exercise prescription based on data obtained from previous sessions.Each inmate then received a smart bracelet and was assigned a specific sports device through a computerized numbering system. Their physical data, exercise speed and heart rate changes were all displayed on the screen in real time. A detailed physical fitness report was eventually generated to inform them of their drug rehab status and progress.The sports training center at the rehab center was established in October 2018 and officially went into operation on December 11 the same year. The 2,800-square-meter center is equipped with 148 pieces of smart sports equipment. Many of the visitors commented that it was even more intelligent than many domestic private physical therapy and fitness centers.

New tech Exercise rehab originated in the US, but has been sweeping Chinese rehab centers since June 2018. Pilot projects have been carried out in 24 drug rehabilitation facilities in 11 provinces.As the main battlefield of drug control, this drug rehabilitation center in Yunnan Province, which borders the notoriously drug-infested Golden Triangle, has introduced a number of smart tech features. The Golden Triangle is the area where the borders of Thailand, Laos, and Myanmar meet at the confluence of the Ruak and Mekong rivers. It is one of the largest opium-producing regions in the world.While it is not yet known how many addicts in Chinese drug rehab centers have been joining the sports-based program, the number is thought to be large. In the first half of 2019, more than 10,000 drug addicts in the province participated in the sports training, according to a report released by the Ministry of Justice on June 25.   At the 2019 International Drug Rehabilitation Forum held on June 26 in Kunming, the capital of Yunnan Province, Zhou Chenglin, a professor at the Shanghai University of Sport, explained the sports-based program.He noted that the reward circuits and many other parts of the brain related to learning and memory of drug addicts are usually seriously impaired. Exercise can compensate for these injuries, and restore their cognitive function, adjust their emotions, and improve their ability to control themselves.In addition to physical exercise, other pilot methods include VR technology, which has been used with addicts at rehabilitation centers across many Chinese cities since 2018. Shanghai's VR drug rehabilitation program has taken a leading global position by virtue of its advanced "trace eyeball movement" installed in the VR helmet, a device that can track an addict's electrodermal activity (EDA) and pulse rate. Through observing how an addict's eyeballs move around when looking at drug-related images, doctors can find out if an addict's drug dependency remains high.Mu is a 28-year-old male addict who came to the fifth drug rehab center three weeks ago. When he stared at a lifelike scene in the device of a group of fashionable young people sitting in a KTV box and drinking from a bottle through a straw, Mu swallowed subconsciously. Mu's physical data was captured and presented on the screen, which showed that his eyes stayed on the bottle longer than normal. It indicated that he still craves drugs and is still in an acute physiological detoxification phase. But the smart tech and data obtained can offer him a more tailored treatment."A personalized approach to individual treatment can really make a difference," Viroj Sumyai, the former president of the International Narcotics Control Board (INCB), told the Global Times after his visit to the rehab center, commenting that he was deeply impressed by the electronic treatment approach, together with other traditional therapeutic methods, in the center."From my point of view, it is far more advanced than some countries, even than the Western world," Sumyai told the Global Times.

All innovative and smart treatment methods emerging in China come against a backdrop of rising global drug use and a growing number of new synthetic drugs.According to data released by the UN Office on Drugs and Crime (UNODC) in 2018, the number of addicts worldwide rose from 208 million in 2006 to 275 million in 2016. Worldwide, the number of people dying directly from drugs increased by 60 percent from 2000 to 2015. This change is the consequence of an increase in the global number of cannabis users, said experts at the forum, particularly in North America, Western and Central Europe, and many countries in Latin America."In 2018, Canada rubbed salt into the wounds," Hao Wei, the vice president of the INCB, said at the forum on June 26, referring to Canada's legalization of non-medical use of marijuana along with Uruguay, parts of the United States and the Netherlands.As vice president of the INCB, Hao criticized the legalization of recreational marijuana, saying it violated the 1961 Single Convention on Narcotic Drugs, an international treaty prohibiting the production and supply of specific drugs except under license for specific purposes such as medical treatment and research. He warned the international community to be clear about the gap between the legalization of medical treatment and recreational use of marijuana.Human rights concernsConcerns over violations of human rights in a compulsory detox system have existed in the international community for decades.In March 2013, the UN issued a joint statement on the closure of compulsory detention centers for drug addiction and rehabilitation, calling on countries that have such centers to close them."Those who hold these concerns did not get a chance to visit China's drug rehab centers. The call for closure is based on their investigations of cases in South American countries, where human rights violations and the spread of HIV existed," Hao said. "But it is an issue of regulation. Prisons can also create a lot of problems, so why don't we close them all? Does that solve the problem? Where will these recovering people go after we close the centers? Wouldn't it be better if drug users were able to turn over a new leaf through compulsory isolated treatment and switch to voluntary rehab after that?" Hao asked. "Many people use human rights as an excuse to attack the coercive treatment. This is not a debate about a science problem, but a matter of conflict of values, an issue of ideology," Hao told the Global Times. Sumyai echoed Hao's view. He said that "concerns from the UN is not applicable for every country in the world because there is no one set fit for all policy." "We have compulsory isolated drug rehab centers in Thailand, and we offer facilities - dormitory, gym, clinic, job center - to serve them for a better future when they go back to the community, as China does," Sumyai said.Serving the futureVocational skills training courses are common in many mandatory drug rehab centers across Yunnan, including courses on WeChat e-commerce marketing, motorcycles, cooking and welding, among many others. During a visit to the Yunnan Women's Compulsory Isolation Drug Rehabilitation Center, the Global Times reporter saw a group of female inmates were learning how to make flower bouquets. The soft classical background music seemed to relax them completely. The instructor, surnamed Jiang, told the Global Times that Yunnan is a major flower-growing province in China. The course aims to teach drug addicts to take advantage of local agriculture to acquire a low-threshold skill, and at the same time to relax to the fragrance and music, which is conducive to kicking drug addiction.Frederic Blow, a professor and director of the Addiction Center at the Department of Psychiatry at the University of Michigan, said that he was very impressed by the scientific changes and new developments in China's rehab centers. He also called for "a scientific exchange between China and the US, putting aside political and other concerns.""It's crucial to continue our dialogue, to learn from each other, and to grow, to jointly resolve this worldwide problem," Blow told the Global Times.