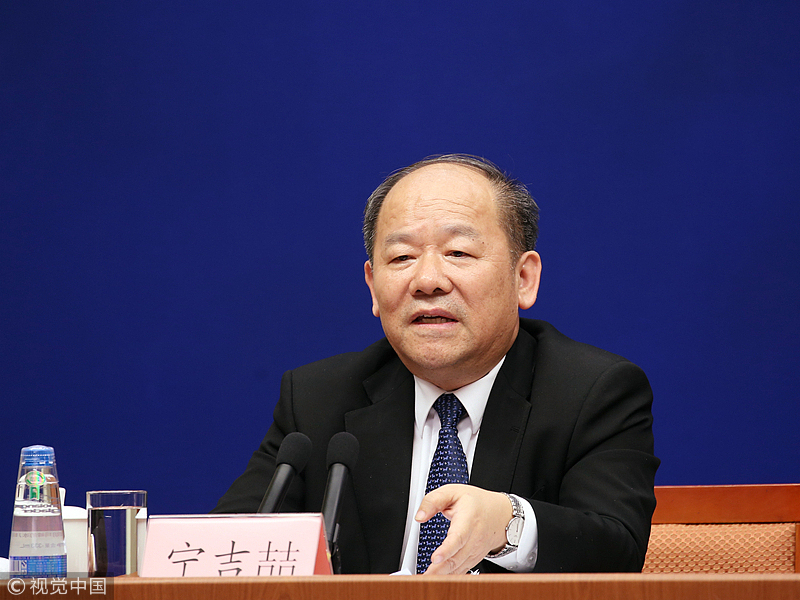 Ning Jizhe, deputy of the National Development and Reform Commission and head of the Natioal Bureau of Statistics. (Photo: CGTN)

BEIJING (Xinhua) -- Despite new challenges and changes in the external environment, the Chinese economy is on a solid footing to maintain a stable and positive outlook, said Ning Jizhe, deputy head of the National Development and Reform Commission and head of the National Bureau of Statistics.

Responding to concerns about the downward pressure on the Chinese economy, Ning said the focus should be on the overall trend instead of specific indicators, and current fluctuations in the economic index were within a reasonable range.

The Chinese economy has maintained stable and sound growth so far this year, laying a solid foundation for achieving the annual goal of economic and social development, Ning said.

The first half of this year saw a 6.8 percent growth of China's GDP, which had stayed within the range of 6.7 percent to 6.9 percent for 12 consecutive quarters. China had also maintained stability in the employment, price and balance of international payments to facilitate stable and positive economic growth.

Ning also noted China's economic structure had been improved, with consumption becoming a more fundamental driver of economic growth. While the profits and development quality of the Chinese economy improved, the per capita disposable income of Chinese people kept growing.

He emphasized that investment, a key factor in economic development, played a crucial role in maintaining stable and sound growth and coping with external risks.

China would be devoted to strengthening environmental protection, poverty alleviation and the development of rural areas and agriculture. China would also eliminate all types of unnecessary investment barriers and promote private investment, Ning said.

Ning highlighted the relationship between stable growth and risk prevention, adding that the economy should grow within a reasonable range to avoid risks.

China was unavoidably affected by the trade frictions due to the growing interdependence between the Chinese economy and global economy in the process of China's reform and opening-up, but the stable and positive trend of China's economy would not stop, Ning said.

Despite the complicated domestic and external environment, the rise of trade protectionism and unilateralism and the fluctuations in the global financial market, China's economy was resilient and flexible enough to cope with any risks and China would achieve the annual goal of economic and social development.

China should continue to advance the supply-side structural reform, pursue high-quality development and facilitate rational growth to maintain the stability of the Chinese economy, he added.

Apart from creating more jobs and expanding domestic demand, China should strive for greater levels of reform and opening-up and facilitate international cooperation in trade and investment, Ning added.

Speaking of the effects of the trade frictions with the United States, Ning said whether direct or indirect, short-term or long-term, they were all controllable.

With the transformation and upgrading of the Chinese economy, domestic demand has played an increasingly important role in economic growth. China has been capable of reducing the effects of trade frictions to a controllable range by maximizing the momentum of domestic consumption and investment.

Ning added that the effects of trade frictions on the employment, price, and balance of international payments could also be overcome with effective policies and measures.