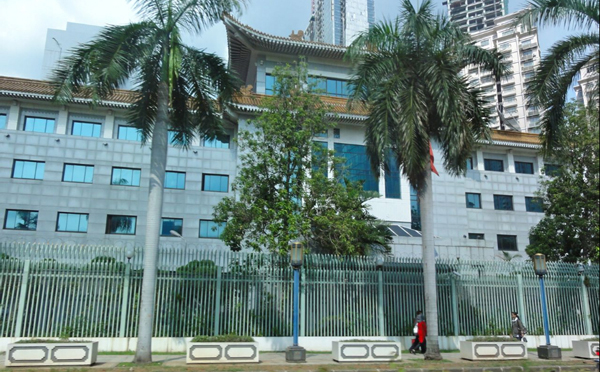 Jakarta (People’s Daily) – The Chinese Embassy in Jakarta together with the Chinese Mission to ASEAN recently celebrated the 69th birthday of the People’s Republic of China at the Shangri-La Hotel in Indonesia’s capital city.

Chinese Ambassador Xiao Qian said, “Thanks to our dedication over the past 69 years, especially since the reform and opening-up 40 years ago, China has achieved a tremendous transformation: it has stood up, grown rich, and is becoming strong. We are crossing the threshold into a new era.”

Ambassador Xiao point out that in this new era as China moves towards prosperity, China-Indo and China-ASEAN relations are rapidly progressing.

“This year, we celebrate the 5th anniversary of China-Indonesia Comprehensive Strategic Partnership. Over the past five years, President Xi Jinping and President Joko Widodo have exchanged visits and held bilateral meetings on various occasions. The two presidents’ strategic leadership has ensured healthy and steady growth of bilateral ties. We are entering a new era featuring high-performing relations with bright prospects,” said Xiao.

This year also marks the 15th anniversary of China-ASEAN Strategic Partnership. For the past 15 years China’s ASEAN relations have grown exponentially by tackling common challenges and upholding peace and prosperity. The China-ASEAN cooperation is among the most successful and dynamic in the Asia-Pacific region.

Ambassador Xiao emphasized how bilateral trade between China and ASEAN has jumped from $55.2 billion to $514.8 billion while two-way visits soared from $3.87 million to $49 million.