LONDON, April 23 (Xinhua) -- The Chinese side expresses its strong condemnation of a motion related to Xinjiang passed by the British House of Commons, a spokesperson for the Chinese embassy in Britain said Thursday. 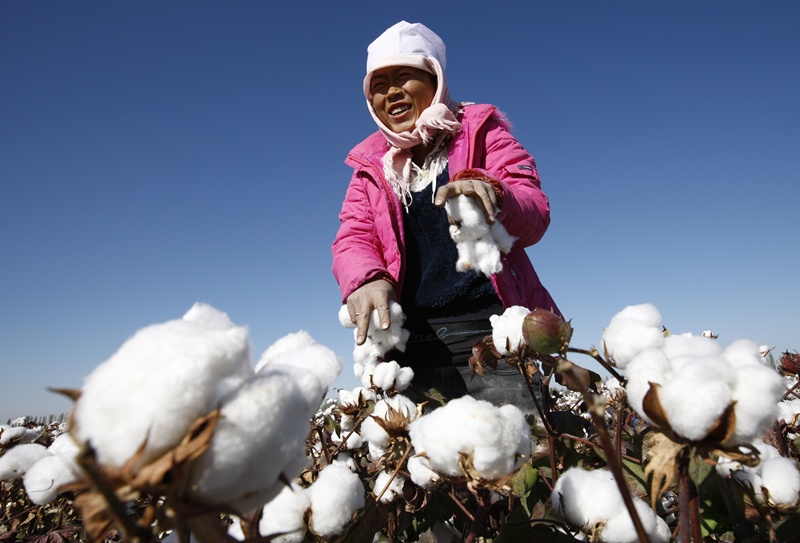 A farmer picks cotton in a field in Hami, Xinjiang Uygur autonomous region, in the fall of 2020. (Photo: chinadaily.com.cn)

"A handful of British MPs (Members of Parliament) cooked up this motion on Xinjiang in disregard of facts and common sense with a view to discrediting and attacking China. This move gravely violates international law and the basic norms governing international relations and grossly interferes in China's internal affairs. The Chinese side firmly opposes this and expresses its strong condemnation," said the spokesperson in a statement.

The spokesperson stressed that the so-called "genocide" against Uygurs in Xinjiang is a flat-out lie which violates international law.

"No country, organization, or individual is qualified or entitled to determine arbitrarily that another country has committed 'genocide'. In international relations, no country should use this accusation in a political game of rumor-mongering and malicious manipulation," said the spokesperson.

The so-called "genocide" is an outrageous smear against the development achievements of Xinjiang and China's Xinjiang-related policies, said the spokesperson.

The Xinjiang-related issues are in essence about countering violent terrorism, radicalization and separatism, and they bear on China's sovereignty, territorial integrity and national security, said the spokesperson.

Thanks to the concerted efforts of people of all ethnic groups, there has been no violent terrorist case in Xinjiang for over four years in a run.

The spokesperson noted that the population of Uygurs in Xinjiang has kept growing in recent years.

"It is a fact that there is no 'genocide' in Xinjiang and China has never committed the so-called 'crimes against humanity'. The 'genocide' smear campaign against Xinjiang is sheer political manipulation in the name of human rights," said the spokesperson.

"For those British MPs making groundless accusation of "genocide" against Xinjiang, it is rather the grave domestic violation of human rights here in the UK that calls for deep reflection and rectification," said the spokesperson.

The spokesperson noted that a few days ago, the United Nations Working Group of Experts on People of African Descent strongly condemned the report by Britain's Commission on Race and Ethnic Disparities, pointing out that the report distorted and falsified the historical and current facts of racism in Britain.

"We urge the UK side to recognize the development of Xinjiang, have a right understanding on Xinjiang-related issues, take concrete measures to respect China's core interests and major concerns and immediately right its wrong moves," said the spokesperson.