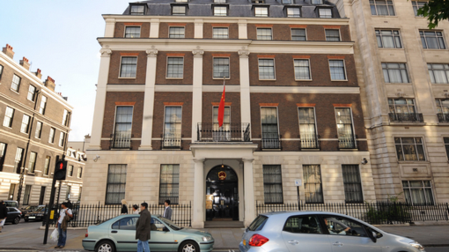 The Chinese Embassy in Britain on Monday expressed strong opposition to the recent remarks made about China by Britain's Secretary of State for Foreign, Commonwealth and Development Affairs James Cleverly.

Cleverly said in an interview recently that China is an incredibly challenging country on the international stage, and that China's behavior is "unacceptable" on affairs related to Xinjiang and Hong Kong.

"The remarks by the British side are a distortion of the facts and slander against China," the embassy's spokesperson responded in a statement published on the Chinese embassy's website

The spokesperson stressed China has always respected the sovereignty of other countries and opposed interference in other countries' internal affairs; upheld peace and stability and rejected war and turmoil; stood for dialogue and cooperation and opposed confrontation and rivalry; and advocated multilateralism and stood against unilateralism.

"In contrast, the UK and the U.S. frequently interfere in the internal affairs of other countries, create conflicts and frictions across the world, and practice double standard in international affairs. Who is challenging and undermining the international order? The international community has a fair judgment," the statement read.

Noting affairs related to Xinjiang and Hong Kong are purely China's internal affairs, the spokesperson said the British side has no right to make irresponsible remarks.

The Chinese government's policies on Xinjiang and Hong Kong are conducive to safeguarding human rights, promoting development, and achieving long-term peace and stability, the spokesperson said, adding that no one can stop the Chinese people from running our country according to our own will.

The Chinese embassy urged the UK side to abandon ideological prejudice, respect the facts, and keep pace with the times. "The UK should stop lecturing others, stop pointing fingers at other countries, and stop interfering in China's internal affairs."

Only by following the principles of mutual respect, equality and mutual benefit can China-UK relations develop in a healthy manner, the spokesperson added.