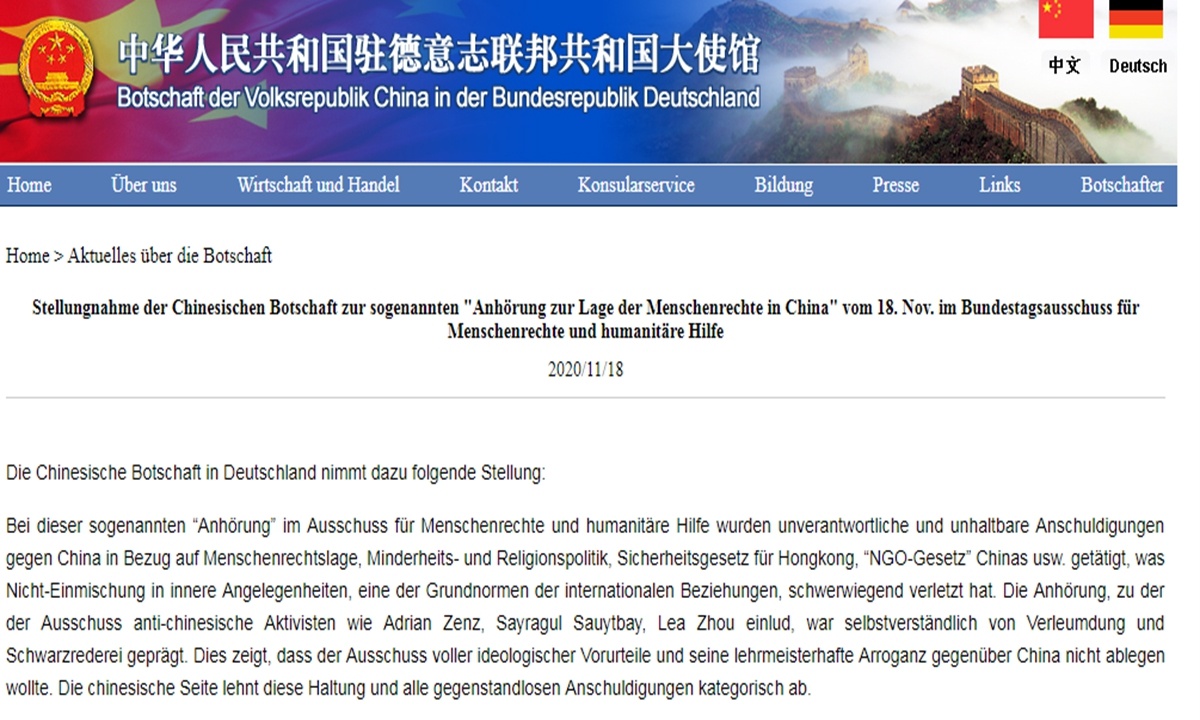 A screenshot from website of Chinese Embassy in Germany

The Chinese Embassy in Germany, in a statement released on Wednesday, firmly opposed Germany's holding of a so-called hearing in its Human Rights and Humanitarian Aid Committee, and urged the committee and relevant politicians to stop slandering China to avoid "further damage" to bilateral ties.

Germany's Human Rights and Humanitarian Aid Committee held a "hearing" on China's human rights situation on Wednesday, during which it invited some infamous anti-China activists and made accusations against China on human rights issues.

This so-called hearing made irresponsible and untenable allegations against China regarding its human rights, minority and religious policies, the national security law for Hong Kong, and laws on NGOs in China. This has severely violated one of the basic norms of international relations on not meddling in a country's internal affairs, according to the statement of the Chinese Embassy to Germany.

The invitation by the committee of anti-China activists, including Adrian Zenz, Sayragul Sauytbay and Lea Zhou resulted in the "hearing" being full of slander and groundless accusations against China. It also fully exposed the committee's ideological prejudice and magisterial arrogance toward China, said the statement.

For example, Adrian Zenz, a German "scholar" who has fabricated unfounded reports on China's Xinjiang and Tibet autonomous regions, has been exposed as a far-right Christian who sees attacking China as his "holy mission given by God."

At a press conference in March, a Xinjiang regional government spokesperson revealed information on Sayragul Sauytbay and said she is a suspected criminal from China's Xinjiang, who has been portrayed as a "human rights fighter" by some Western media.

Sayragul Sauytbay is on the Xinjiang public security authorities' online list of wanted persons for suspected crimes including illegal border crossing and loan fraud.  She has never worked in any vocational education and training center as she claimed and is also known for her bad conduct and rumor mongering, according to the Xinjiang spokesperson.

The Chinese Embassy said that China firmly opposes the wrong deeds of the German committee. It urges the committee and relevant politicians to face the facts, stop smearing China using the excuse of human rights and stop interfering in China's domestic affairs to avoid bilateral ties from being further hurt.

The embassy also noted that the Chinese government always attaches great importance to protecting and promoting human rights. Since the People's Republic of China was founded in 1949, China has made globally recognized progress in the field of human rights. The human rights situation in China is now at its best in Chinese history, and is supported by China's 1.4 billion population. This is a fact that no lies can shake or defame.