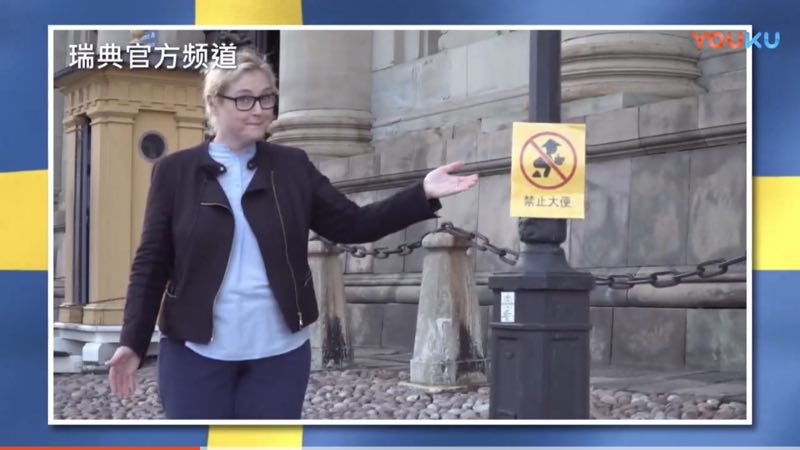 Stockholm (People's Daily) - SVT, Sweden’s largest television station, on Friday aired a segment that insulted Chinese tourists and the country as a whole by using incorrect maps that did not include Taiwan Province and Tibet Autonomous Region as part of China.

Co-hosts Jesper RÖnndahl and Hanna Dorsin both used derogatory terms and images to describe Chinese tourists on the show. The station posted the video titled “Welcome to Sweden” on Youku, a Chinese video website under the name Sweden Official Channel.

The Chinese Embassy to Sweden then published a statement condemning the segment and lodged a strong protest against SVT.

Here is the full text of the statement from Chinese Consulate in Sweden regarding the issue:

In the evening of 21 September, the SVT broadcast a Swedish News program which outrageously insulted China. The program leader Jesper Rönndahl made comments that amount to a gross insult to and vicious attack on China and the Chinese people. We strongly condemn it, and have lodged a strong protest to SVT.

The SVT program and Jesper Rönndahl spread and advocate racism and xenophobia outright, and openly provoke and instigate racial hatred and confrontation targeting at China and some other ethnic groups. The program also referred to a wrong map of China where China’s Taiwan province and some part of the Tibet region were missing, which severely infringes on China’s sovereignty and territorial integrity. The program breaks the basic moral principles of mankind, and gravely challenges human conscience and is a serious violation of media professional ethics. To think that such things could happen in Sweden, an advocate of ethnic equality!

Relevant program staff from SVT argued that this is an entertainment program, an argument which is totally unacceptable and we firmly reject. We urge SVT and the program to immediately give an apology. We reserve the rights to take further actions.