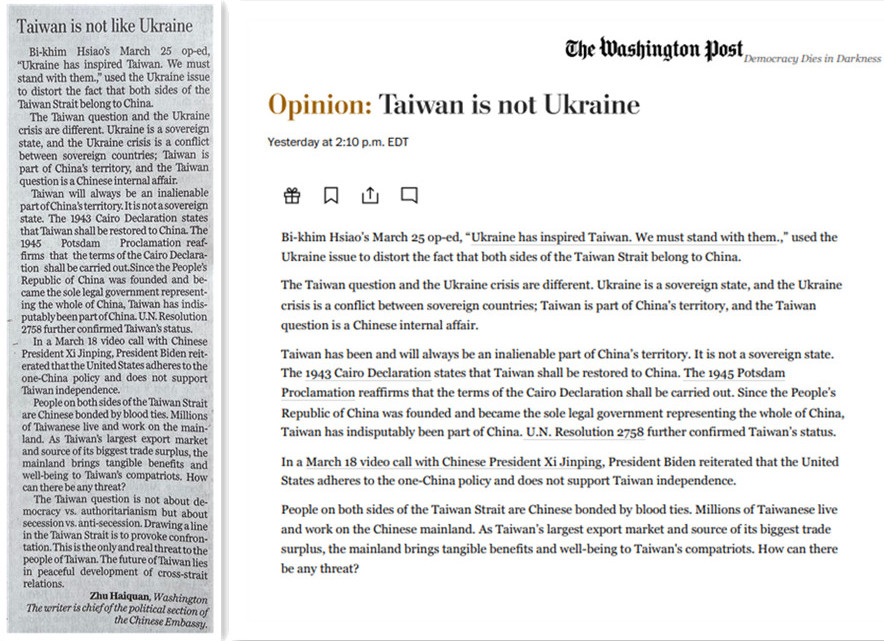 The screenshot shows a letter sent to the editorial board of The Washington Post, which was written by the Chinese Embassy in the United States. [Photo/Xinhua]

Washington (People's Daily) - The Chinese Embassy in the United States has sent a letter to the editorial board of The Washington Post in protest of an op-ed carried recently by the newspaper that absurdly related the Taiwan question to the ongoing Ukraine crisis.

Sent by Minister Counselor Zhu Haiquan, chief of the political section of the Chinese embassy, the letter -- part of which appeared in the Opinion section of The Post's website - was a solemn response to the op-ed authored by Bi-khim Hsiao dated March 24 and titled "Ukraine has inspired Taiwan. We must stand against authoritarianism," which used the Ukraine issue to distort the fact that both sides of the Taiwan Strait belong to one and the same China.

"Taiwan has been and will always be an inalienable part of China's territory. It is not an independent sovereign state," he said.

Combing through historical facts confirming and reaffirming Taiwan's status since World War II neared its end, Zhu wrote that "the 1943 Cairo Declaration states that Taiwan shall be restored to China. The 1945 Potsdam Proclamation reaffirms that the terms of the Cairo Declaration shall be carried out. Since the People's Republic of China was founded and became the sole legal Government representing the whole of China, Taiwan has indisputably become part of China. The (United Nations General Assembly) Resolution 2758 has further confirmed Taiwan's status. These are ironclad facts."

"In the video call with President Xi Jinping on March 18, President Joe Biden reiterated that the United States adheres to the One-China policy and does not support 'Taiwan independence.' The claim that Chinese mainland 'threatens' Taiwan cannot hold water at all. People on both sides of the Taiwan Strait are Chinese bonded by blood ties. Millions of Taiwanese live and work in the Chinese mainland. Why would family members threaten each other? As Taiwan's largest export market and source of its biggest trade surplus, the mainland can only bring tangible benefits and well-being to Taiwan compatriots. How can there be any threat?" Zhu said.

"The Taiwan question is not about 'democracy versus authoritarianism,' but about secession versus anti-secession. Using 'democracy' and 'authoritarianism' to draw a line between the two sides of the Taiwan Strait is to provoke confrontation and seek an excuse for 'Taiwan independence' separatist forces. This is the only and real threat to the people of Taiwan. The future of Taiwan lies in peaceful development of cross-Strait relations and the reunification of China. Chinese people on both sides of the Strait should work together to pursue national reunification," wrote the diplomat.