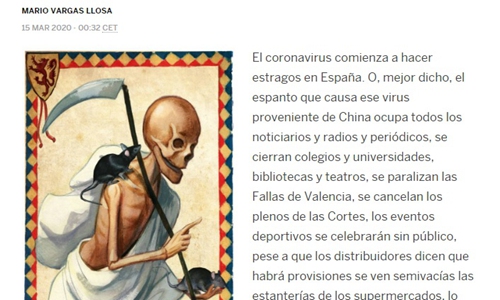 The Chinese Embassy in Peru on Monday refuted Nobel laureate writer Mario Vargas Llosa's accusation of the coronavirus outbreak "from China" as "reckless and biased."

The embassy noticed that Llosa had wantonly accused China in his article published in the Madrid-based  newspaper, El País on Sunday, said the embassy in a statement published in its website and official WeChat account.

"The World Health Organization (WHO) has stated clearly that the source of the new crown virus cannot be determined at present, and that stigmatized language involving the region should be avoided. Therefore, we believe that the expression 'virus from China' in his article is very inaccurate," it said.

The virus, which knows no borders, is the common enemy of all mankind, and all people should unite and respond to the crisis together, the statement urged.

Playing the blame game is unreasonable and does not help solve the problem, the statement said, adding, "We reaffirm that all countries have the right to choose a development path that suits their national conditions."

"We do not know whether Mr. Llosa has contributed to the fight against epidemics in Europe and Peru, while China is indeed actively providing support and assistance to all parties in fighting the epidemic. During this critical period, Llosa is advised to play the role of a public figure, and if he cannot contribute, at least he could stop spreading reckless and biased speech," the statement urged.

While fighting against the epidemic under the strong leadership of the Communist Party of China, the Chinese government has always put the practical protection of people's lives and safety first, said the statement. Effective measures have been taken to protect all Chinese and foreign citizens in China.

Moreover, China attaches great importance to fulfilling its international obligations, and sharing data with all parties as soon as it is possible. The Chinese people have also shown a great sense of responsibility and discipline, made tremendous efforts and sacrifices and implemented lockdowns to contain the virus outbreak epicenter, thus buying time for other countries to fight the epidemic.

So far, China's domestic epidemic situation has been basically brought under control.

According to official sources, no Peruvians were infected in China. China's efforts and achievements have been widely recognized and positively evaluated by WHO and other countries.

The Chinese side has also been actively supporting and helping Peru to combat the epidemic, including a donation of reagents to carry out rapid diagnostic tests for 1,000 suspected cases.

Llosa won the Nobel Prize for Literature in 2010, and many of his works have been published in China.