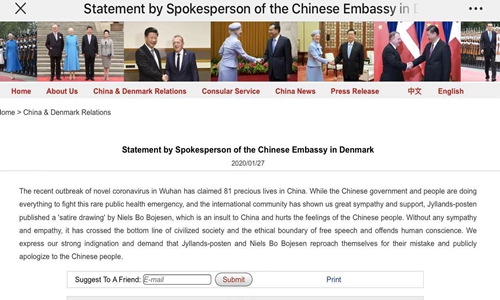 The Chinese embassy in Denmark lashed out at a Danish daily newspaper and a Danish editorial cartoonist over the publication of a satirical drawing which the embassy said is an insult to China and the Chinese people as the nation continues to fight a deadly novel coronavirus.

In the drawing, cartoonist Niels Bo Bojesen used the form of five novel coronaviruses to represent the five stars on the Chinese national flag. The drawing was published on Monday by Jyllands-Posten, a broadsheet newspaper in Denmark.

The recent outbreak of a novel coronavirus, which started in the Chinese city of Wuhan, has claimed 106 lives and sickened 4,515 as of Monday. The entire nation is on high alert to prevent the novel coronavirus from spreading, and Chinese people are taking every precaution to bring it under control.

The cartoon "crossed the bottom line of civilized society and the ethical boundary of free speech and offends the human conscience," a spokesperson with the Chinese embassy to Denmark wrote in a statement on Monday.

It urged the newspaper and the cartoonist to admit their mistake and publicly apologize to the Chinese people.

On Wednesday, the Copenhagen Post reported that the Danish health authority is monitoring the situation closely and is well prepared to tackle the virus if it reaches Denmark.