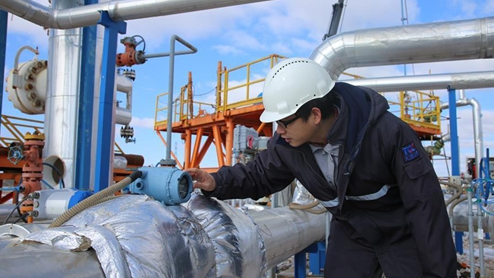 One day before the Chinese Lunar New Year's Eve when most families enjoy a dinner gathering at home, Peng Lianghai, an engineer from China, was checking equipment and recording data alone at an energy plant in Turkey's central province of Aksaray.

It was the fourth year in a row that Peng spent the Chinese Lunar New Year, also known as the Spring Festival, in Turkey, a country nearly 6,000 km away from his hometown of China's southeastern province of Jiangxi.

"The fact that I cannot be with my family at Spring Festival upsets me, but my work needs me to be on duty 24 hours a day, so duty comes first," he said, adding that he would send his blessings to his family this year via video chatting.

Peng works for the Lake Tuz (Salt Lake) Natural Gas Storage project, which was located along the route of the Belt and Road initiative (BRI) proposed by China in 2013.

It was jointly launched in 2011 by the China National Chemical Engineering Corporation (CNCEC) and Turkey's Petroleum Pipeline Company (BOTAS).

Only 26 km away from the main pipeline network that transfers gas from Russia to Europe, the project can store up to 1 billion cubic meters of natural gas once completed.

According to Peng, the project has one of the biggest storage capacities around the world, as it smartly makes full use of the huge space under the Salt Lake.

"There are rich salt reserves under the lake. We first flood water underground to dissolve it, then we pump out the brine and inject compressed natural gas into the emptied room and store it," he told Xinhua.

The storage will be released for use when Turkey runs short of energy supplies, thus, the project provides an effective solution to the energy deficit in Turkey and will be of strategic importance to Turkey's energy security.

Zhou Shili, a manager of the Tianchen Engineering Company of CNCEC, said the brine that the project generates will be poured into Salt Lake, which substantially reduces pollution and helps replenish the lake which is reportedly drying every year.

Peng, who has come to Turkey to work for the project since 2014, said he has got used to working for more than 24 hours incessantly.

"Many of our tasks require us to stay on site for over 24 hours in a row, even if sometimes it is more than 20 degrees below zero outdoors," he said. "When it becomes too freezing to stay outside, we use a container as a temporary shelter."

Peng said the project was constructed under the coordination of various international parties, enabling him to gain valuable experience in cooperating with overseas partners. "I feel honored and proud to be part of it."

Over 70 km away from the nearest city of Aksaray, life on the project site is dull and boring. The young Chinese engineer said he and his colleagues would play football, table tennis or chess during their rest time.

"Like previously, for this year's Spring Festival eve, I am planning to make dumplings and watch the traditional TV program with my fellow colleagues," he laughed.

"This is a big project in Turkey. Our Chinese friends will discuss all the work details with us during meetings. We feel respected. They are brilliant partners to work with," said Aydin Bayar, a Turkish engineer of the project.