United Nations (People’s Daily) - A Chinese envoy on Friday asked Japan to reverse its decision to discharge nuclear-contaminated water from the Fukushima Daiichi Nuclear Power Plant into the sea. 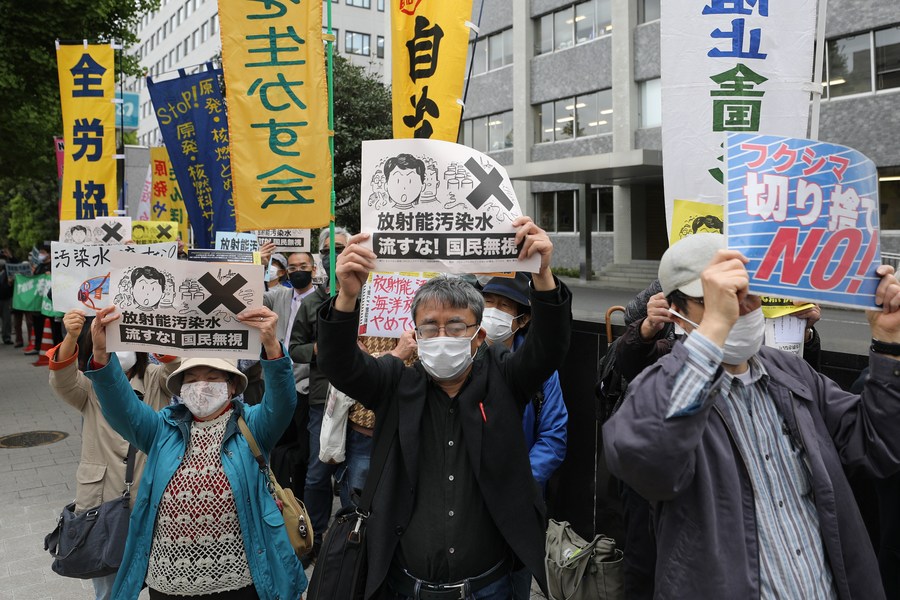 People rally to protest against the Japanese government's decision to discharge contaminated radioactive wastewater in Fukushima Prefecture into the sea, in Tokyo, capital of Japan, April 13, 2021. [Photo/Xinhua]

Geng Shuang, China's deputy permanent representative to the United Nations (UN), told a meeting of parties to the UN Convention on the Law of the Sea that the Fukushima nuclear accident is one of the most serious in world history. The contaminated water is composed of cooling water injected into the melted reactor core, as well as groundwater and rainwater. It consists large amounts of radioactive isotopes which are created in the fission process and non-existent in nature. There is no precedent to refer to and the impact on marine environment, food security and public health cannot be neglected, he said.

“If the Fukushima nuclear contaminated water will be harmless as Japan has claimed, why would they not keep it for domestic use? Why does it insist on dumping it into the sea?” he asked.

Geng also emphasized that the Japanese side has not been transparent and open despite its claims. Before the announcement of its decision to release nuclear contaminated water into the sea, Japan did not fully consult with neighboring countries and other stakeholders. After the announcement, many Pacific-rim countries including China, as well as organizations such as the Pacific Islands Forum, all expressed concerns on Japan's decision. But so far, Japan has not responded earnestly and addressed such concerns, said Geng.

The IAEA has never endorsed or approved Japan's decision to release nuclear contaminated water into the sea. At present, the IAEA is establishing a technical working group and has confirmed that specialists from China and the Republic of Korea will be invited to join the group. China will offer full support to this work, urging Japan to respond to the concerns of the stakeholders and the international community, Geng said.

Japan should act in good faith, with a highly responsible attitude toward international public interest, and prudently address relevant issues in an open, transparent and scientific manner, he said.

Geng said that the disposal of the nuclear contaminated water from the Fukushima nuclear accident is not merely a domestic issue for Japan. The planned actions will severely harm international public health and safety, and hurt the immediate interests of neighboring countries and their people. “We once again urge Japan to revoke its wrong decision. It must not wantonly start the ocean discharge before consulting and reaching consensus with all stakeholders including neighboring countries and relevant international institutions,” he said.