CHINA Chinese envoy calls for cessation of hostilities in Yemen

Chinese envoy calls for cessation of hostilities in Yemen 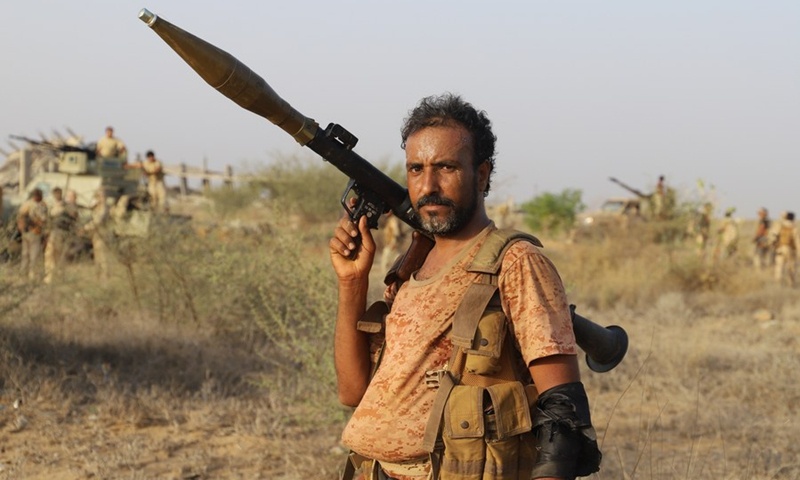 A soldier of the Yemeni government holds a rocket-propelled grenade (RPG) as the army launches an offensive against the Houthi rebels in Abs district, Hajjah province, Yemen on March 12, 2021. (Photo: Xinhua)

A Chinese envoy on Tuesday called for the immediate cessation of hostilities in Yemen and a return to the political settlement of the crisis.

Military clashes and all hostilities in Yemen must immediately stop. The protracted conflict in Yemen has caused huge losses for all parties and untold suffering for its people, said Geng Shuang, China's deputy permanent representative to the United Nations.

Facts have repeatedly proved that military means cannot resolve the problem. Instead, war can only lead to disasters, he told the Security Council.

Since last year, the United Nations has vigorously strived for the implementation of a global cease-fire. Launching military offensives and provoking hostilities now are the most unconscionable things to do, he said. "China expresses its concern of the escalation of the clashes in Marib, condemns attacks against Saudi civilians and civilian infrastructure, and calls for the immediate cessation of hostilities and violence so as to create necessary conditions for a political settlement of the Yemeni issue."

Political commitments should be honored and political negotiations advanced. Despite difficulties and setbacks, there should be no deviation from the pursuit of a political settlement to the Yemeni issue, he said.

Parties to the conflict should break free of the vicious cycle of going back and forth between the battlefield and the negotiating table. They should implement past agreements, which help to build mutual trust and make new gains, said Geng.

UN Special Envoy for Yemen, Martin Griffiths, has proposed a way forward to advance the political process. China hopes that parties will collaborate with his mediation efforts, participate in consultations with utmost political sincerity, so as to reach early consensus, he said.

Regional security cooperation should be strengthened to help ease tension in Yemen, he said.

Resolving the Yemeni issue requires a favorable regional security environment. China has proposed a multilateral dialogue platform in the Gulf region. Other countries have put forward similar ideas. China hopes that those ideas can be put into practice through joint efforts so as to promote the regional peace process, he said.

"We hope that on the premise of respecting Yemen's sovereignty, independence, unity, and territorial integrity, relevant countries can utilize their advantages to positively influence parties in Yemen so as to contribute toward politically settling the Yemeni issue."

He also called for efforts to mitigate the humanitarian crisis in Yemen.

The mounting food security crisis is gut-wrenching. China hopes that the international community can build on the high-level pledging event for Yemen on March 1 and step up assistance to Yemen and fully fund the Yemen humanitarian response plan, he said.

China welcomes the UN secretary-general's announcement of the creation of a high-level task force on preventing famine in Yemen, and looks forward to seeing it play an important role in mobilizing global resources and strengthening coordination among humanitarian agencies, he said.

Yemen highly relies on imports for its food security. Parties should ensure the operations of commercial ports. Parties with actual control inside Yemen should comply with international humanitarian law and provide safe and unfettered humanitarian access so as to create conditions for the protection of civilians, in particular women, children, and other vulnerable groups, he said.

On the derelict oil tanker Safer, China urges Houthis to expeditiously grant access to the UN technical team for inspection and repairs to prevent catastrophic accidents, he said.