UNITED NATIONS, Oct. 27 (Xinhua) -- A Chinese envoy on Wednesday called on parties in Syria and parties that have influence to create conditions for the political process in the country. 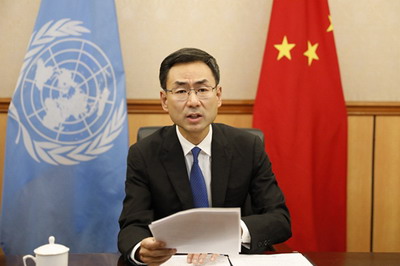 China welcomes the holding of the sixth round of the Constitutional Committee on schedule and notes that it did not achieve the expected results, said Geng Shuang, China's deputy permanent representative to the United Nations.

Syria continues to suffer from foreign occupation, unilateral sanctions and terrorism, and there is a serious lack of political mutual trust among parties in Syria, Geng said.

The future and destiny of the country are not entirely in the hands of the Syrian people, and therefore, it is not surprising that the Constitutional Committee has encountered difficulties and hiccups in its work, he said.

All parties in Syria and the parties that have influence on Syria should take practical measures to follow the Syrian-led and Syrian-owned principle and carry out active cooperation and gradually build up mutual trust so as to create conditions for the political process, lend substantive support to the work of the special envoy and jointly promote the implementation of Security Council Resolution 2254, he said.

Last week saw a terrorist attack in Damascus that caused casualties. China opposes terrorism in all its manifestations, and supports the Syrian government's anti-terrorism efforts. Terrorism is a scourge against humanity. The Security Council should send a consistent and clear signal to the terrorist forces in Syria and reject double standards, said Geng.

The humanitarian situation in Syria is deeply worrying. As winter approaches, Syria's humanitarian needs will further rise. The international community must pay equal attention to humanitarian assistance and economic reconstruction and use a multi-prong approach to help the Syrian people cope with multiple challenges, he said.

China appreciates the large-scale humanitarian relief operations in Syria carried out by the World Food Programme (WFP), the World Health Organization, the UN Children's Fund and other agencies, Geng said.

On Aug. 31, the WFP made a cross-line humanitarian delivery to Idlib from Aleppo for the first time, which was a major breakthrough, he said. China hopes that all parties concerned will work together to develop a plan for inter-agency cross-line operations in Northwest Syria, he added.

China also welcomes the fact that various UN agencies have carried out early recovery and livelihood projects in Syria, repaired infrastructure, cleaned up ruins, and provided training and job opportunities for the Syrian people, he said.

Recently, Syria has cooperated with Egypt, Jordan, and Lebanon on natural gas. China encourages regional countries to enhance interaction and mutual assistance to jointly improve the regional, economic and humanitarian situation, he said.

It must be pointed out that unilateral sanctions have exacerbated the economic and humanitarian crisis in Syria and run counter to the international community's efforts and must therefore be lifted immediately, he said.