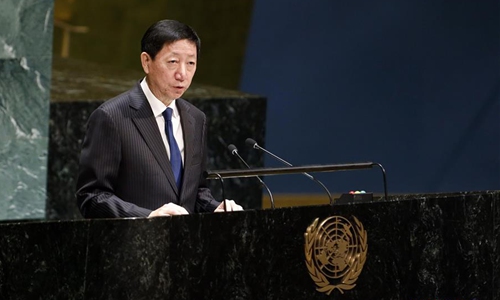 A Chinese envoy on Tuesday asked for efforts to promote global ocean governance.

"We must stay committed to multilateralism and actively promote global ocean governance," said Wu Haitao, China's deputy permanent representative to the United Nations. "It is necessary to espouse the spirit of extensive consultation, joint contribution and benefit sharing, improve international legislation for oceans and seas and improve the ocean governance regime."

The United Nations Convention on the Law of the Sea should be interpreted and applied in good faith and in an accurate manner, and its integrity maintained. Matters not regulated by the convention shall continue to be governed by the rules and principles of general international law, Wu told the UN General Assembly.

He also asked for the broadening of the avenues of development and the implementation of the Sustainable Development Goals related to oceans and seas.

"It is necessary to balance the protection and the sustainable use of oceans and seas to achieve orderly exploitation and use of marine resources. We should develop a blue economy, promote maritime connectivity and practical cooperation in various fields, and jointly build the 21st Century Maritime Silk Road."

Wu asked countries to work together to meet the new challenges and leave a legacy of unpolluted seas and skies for future generations.

Joint efforts should be made to protect marine ecological civilization, further strengthen the prevention and control of marine environmental pollution, protect marine biodiversity and promote the conservation and rehabilitation of marine ecosystems, he said.

He also asked for joint efforts to address such challenges as illegal fishing and marine pollution and actively study and work out appropriate solutions to the emerging ocean-related issues, including the impact of climate change on oceans, sea-level rise, marine litter and microplastics.