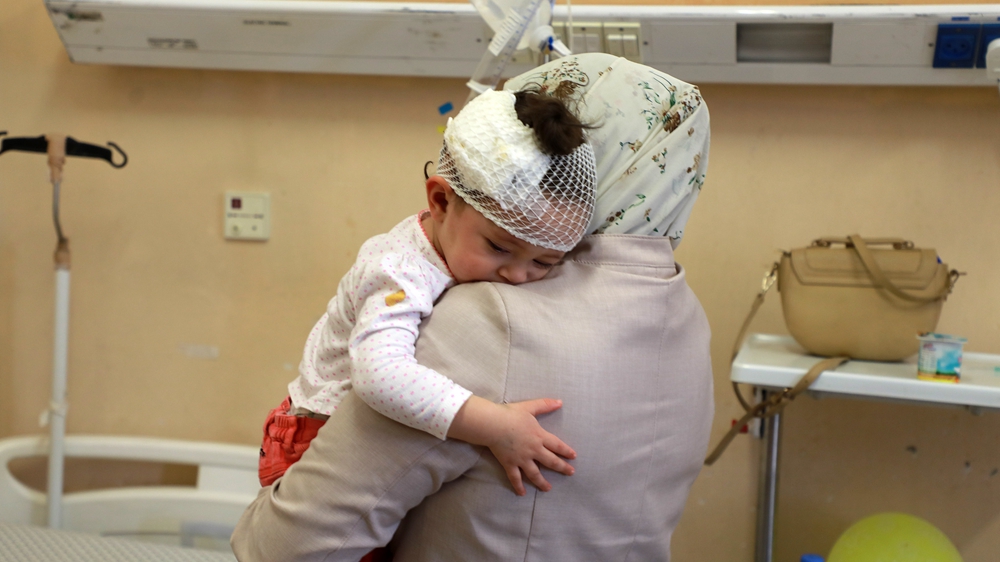 A Palestinian mother carries her daughter, who was wounded in overnight Israeli air strikes on the Gaza Strip, as she receives treatment at Al-Shifa Hospital in Gaza, May 16, 2021. (Photo: CFP)

UNITED NATIONS, May 20 (Xinhua) -- Zhang Jun, China's permanent representative to the United Nations, on Thursday called on the international community to give more play to the Security Council's role in making efforts to solve the Palestinian question.

"China commends the great majority of Council members for their efforts and urges the relevant member to demonstrate its sense of responsibility. Despite the difficulties, China will continue to support the Council in taking actions, remaining united and speaking with one voice, so as to work with the international community in an unremitting, unrelenting effort to end the current crisis, and find a just solution to the Palestinian question," Zhang told the UN General Assembly plenary meeting on the situation in the Middle East and Palestine.

Zhang, who is also the president of the Security Council for the month of May, called for efforts to cease hostilities and violence immediately to avoid more civilian casualties.

"China condemns all violence against civilians, opposes all violence-inciting rhetoric and calls for the immediate end of hostilities and violence," he said.

The ambassador urged parties concerned to earnestly implement UN resolutions and protect the legitimate rights and interests of the Palestinian people.

The ambassador expressed the hope to "redouble the efforts to promote peace talks, and a two-state solution."

"The root causes of the repeated eruption of conflict between Palestine and Israel is the fact that the Middle East peace process has been off track and UN resolutions are not effectively implemented," he said.

"China supports all efforts conducive to the realization of the two-state solution. To this end, the international community, especially countries with influence on the parties, should play an active role," said the envoy.

"As a sincere friend of the Palestinian people, China firmly supports Palestine's just demand and the establishment of a fully sovereign, independent Palestinian state by its people on the basis of 1967 borders and with East Jerusalem as its capital. China will continue to make efforts for this endeavor," said the ambassador.