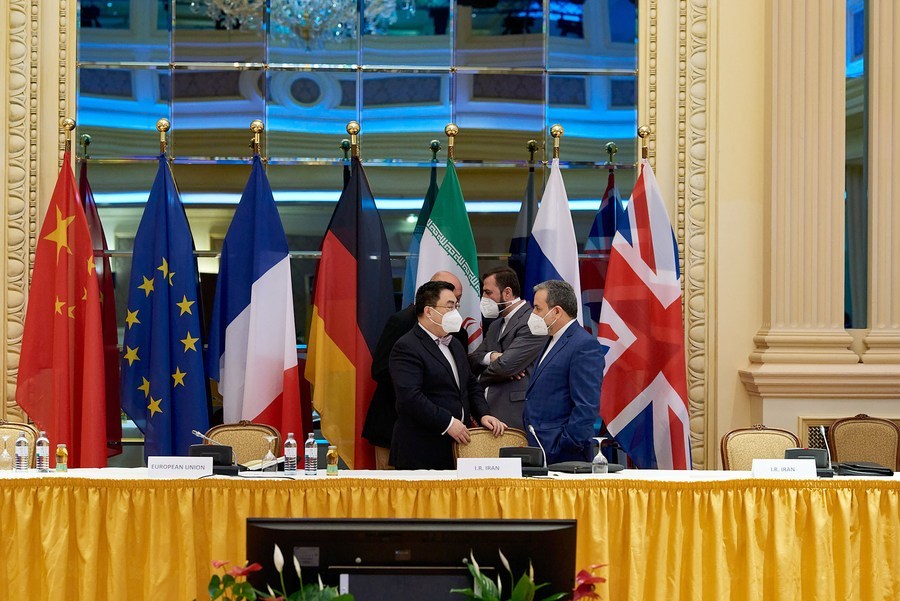 Wang Qun (L, front), Chinese envoy to the United Nations and other international organizations in Vienna, talks with Iranian deputy foreign minister Abbas Araqchi (R, front), at a meeting of the Joint Commission on the Joint Comprehensive Plan of Action (JCPOA) in Vienna, Austria, May 7, 2021. (Photo: EU Delegation Vienna/Handout via Xinhua)

VIENNA, May 25 (Xinhua) -- A Chinese envoy on Tuesday urged all parties concerned to show political decisiveness in the ongoing negotiations to revive the 2015 Iran nuclear deal, officially known as the Joint Comprehensive Plan of Action (JCPOA).

Wang Qun, Chinese envoy to the United Nations and other international organizations in Vienna, made the remarks after the JCPOA Joint Commission started a new round of talks on Tuesday.

The meeting came just one day after Director General of the International Atomic Energy Agency (IAEA) Rafael Grossi announced that the temporary arrangement reached with Iran in February, which allows the agency to monitor Iran's nuclear activities, will be extended by one month to June 24.

China welcomes the extension as it provides favorable conditions for advancing the talks of the Joint Commission, said Wang.

China hopes that all parties involved will enhance a sense of urgency, show due political decisiveness, seek package solutions and reach an early agreement on resuming compliance with the JCPOA, Wang said.

"We hope that the reasonable demands of the Iranian side will be properly resolved in this negotiation. Of course, China will also continue firmly safeguarding its own legitimate rights and interests," Wang said.

China is willing to continue working with all parties concerned to actively promote an early agreement of the negotiations, he added.

The Joint Commission meeting was chaired by Enrique Mora, the deputy secretary-general and political director of the European External Action Service and attended by representatives from China, France, Germany, Russia, Britain and Iran.

Alain Matton, a spokesperson for the Delegation of the European Union to International Organizations in Vienna, told reporters on Tuesday that the Joint Commission welcomed the prolongation of the technical understanding reached between the IAEA and Iran, as it "gives space" for the ongoing diplomatic process in Vienna.