CHINA Chinese envoy fights back at US accusations in Security Council

Chinese envoy fights back at US accusations in Security Council 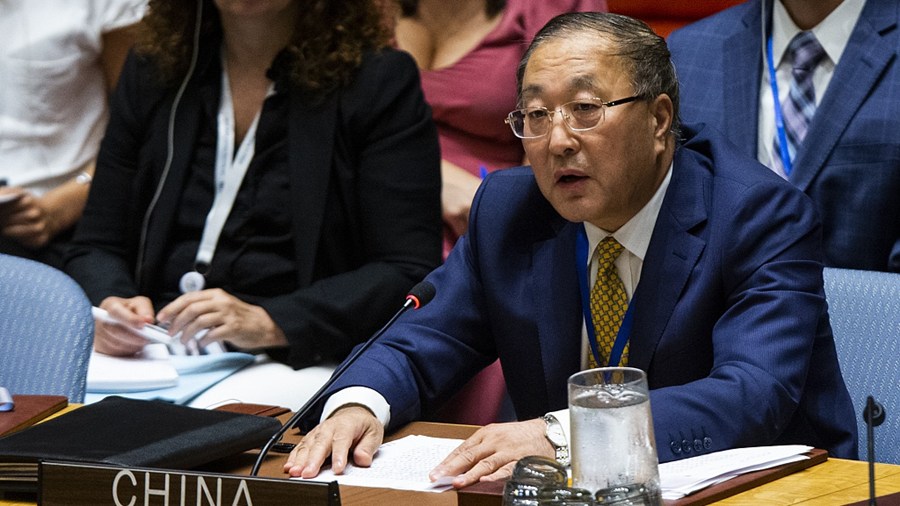 UNITED NATIONS, Sept. 24 (Xinhua) -- China's permanent representative to the United Nations, Zhang Jun, on Thursday fought back at U.S. accusations against China over the handling of COVID-19.

At a summit-level debate on "global governance after COVID-19," the U.S. permanent representative to the United Nations, Kelly Craft, repeated President Donald Trump's demand to hold China accountable for the spread of the virus.

In response, Zhang said Thursday's meeting was a moment for solidarity and cooperation, as reflected by the appeals of the vast majority of Security Council members.

"Regrettably, we once again heard noises from the U.S. that are so at odds with the atmosphere of the meeting. China resolutely opposes and rejects the baseless accusations by the U.S.," said Zhang.

For quite a while, some U.S. politicians have been obsessed with attacking other countries and UN bodies. Abusing the platform of the United Nations and its Security Council, the United States has been spreading "political virus" and disinformation, and creating confrontation and division, he said.

Such practice cannot defeat the virus. On the contrary, it has seriously disrupted the joint efforts of the international community to fight the pandemic, he said.

"I must say, enough is enough. You have created enough troubles for the world already," said Zhang.

China was the first to be hit by the outbreak of COVID-19. The timeline of China's response is clear. Under the leadership of the Communist Party of China, the Chinese people have united together in the fight against the virus. China's great efforts and sacrifice are clear to all. China's contribution to the global battle against the pandemic is also well recognized, he said.

The United States should understand that its failure in handling COVID-19 is totally its own fault, said Zhang.

The United States has nearly 7 million confirmed cases and over 200,000 deaths by now, he noted.

"With the most advanced medical technologies and system in the world, why the U.S. has turned out to have the most confirmed cases and fatalities? Many countries which were hit by the pandemic around the same time have already contained the virus, and why the U.S. has failed to do so? According to the official data of the U.S., its minority groups register a higher rate -- disproportionate with their population -- of infection and fatality, why? What is the fundamental cause?" he asked.

The United States should understand that blaming others will not solve its own problems. All countries have their problems along the way of development. And these problems should first and foremost be solved through one's own efforts. By shifting responsibilities, or "lying, cheating, stealing," one will not solve any problem, but only drift further down the wrong direction, he said.

"The U.S. is now standing against the international community, and completely isolated. It's time to wake up," said Zhang.

What the United States needs to do is stop the political manipulation, stop labeling or politicizing the virus, focus on combatting the virus at home, and support the United Nations and the World Health Organization in playing their roles, he said.

"The U.S. should understand that a major power should behave like a major power. When the world is facing many daunting challenges, major countries should shoulder special responsibilities," said Zhang.

The United States always portrays itself as a "force for good," and vows to play a leading role in global affairs. China, like many other countries, welcomes such efforts of the United States to make contributions to world peace and progress of humanity, he said.

To be a good leader, one must lead by example. It should be a model in following international law and fulfilling international obligations. It should take up the responsibilities, rather than pursue exceptionalism, withdraw from international institutions and treaties at will, and disassociate itself from global governance, he said.

To be a good leader, one must promote international cooperation. It should respect and unite all, and value good faith and equality, rather than forcefully impose sanctions, create division and confrontation, bully others, and lead the world to conflicts or even wars, he said.

To be a good leader, one must make tangible contributions to humanity. It should promote cooperation against global challenges, provide more global public goods, adopt a people-centered approach, and lead the world toward a better future, rather than always put its own interests first, seek monopoly, or even use national power to curb the development and technology progress of other countries, he said.

"We hope the U.S., as the most powerful country in the world, will return to the right track of mutual respect and win-win cooperation, and shoulder its due responsibility for world peace and prosperity," said Zhang.