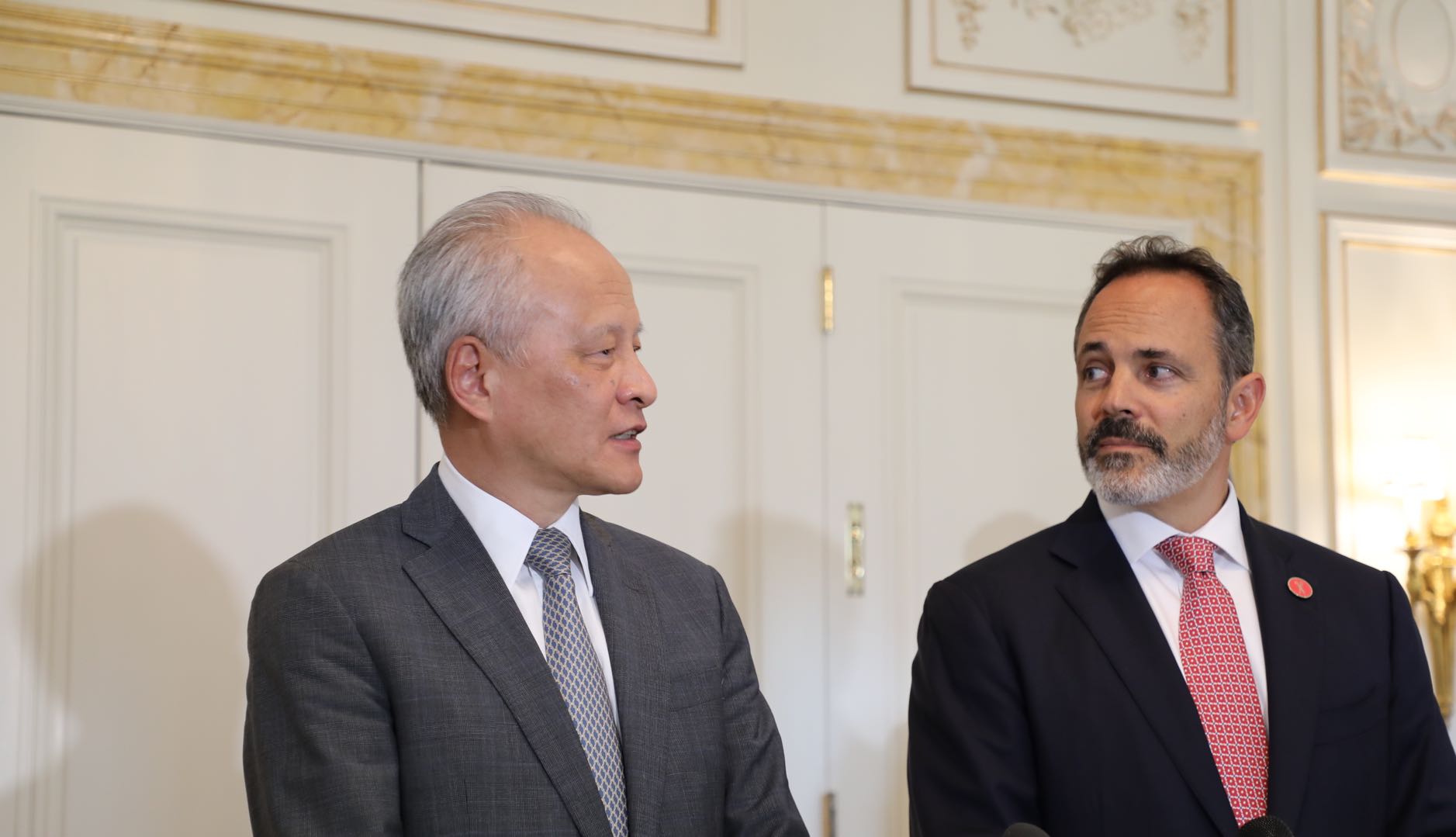 Frankfort (People's Daily) - Chinese Ambassador to the US Cui Tiankai recently met with Kentucky Governor Matt Bevin on Monday, where he mentioned the need for cooperation between the US and China in order to bring prosperity to both nations.

Cui and Bevin met at the Governor’s Mansion in Frankfort, Kentucky, where Cui provided insight into America’s influence on Chinese culture and how China aims to grow by opening-up and through its various reforms.

During a Tuesday press conference, Cui spoke about his overall hope for China-US relations and even how Kentucky’s name became ubiquitous to Chinese citizens through Kentucky Fried Chicken restaurants.

“It was a big event for the Chinese,” Cui said. “It was the first American fast food chain restaurant opened in the Chinese capital. So, people held their birthday parties, weddings, and other big events there. Of course, nowadays KFC and many other American brands have become part of the Chinese people’s daily life.”

Cui said the southern state is also internationally known through its agricultural products, aerospace industry, and even its iconic bourbon distilleries.

Cui said that because of this diverse batch of industries, China has taken a special interest in Kentucky and its investments to the state have now topped $10 billion. Cui said this investment has created thousands of jobs in the last decade and that China enjoys a healthy import/export relationship with the state.

He also mentioned his excitement at Bevin’s upcoming visit to Shanghai in November for the first China International Expo – which signals the on-going and important future of China-US relations.

Cui said it is important to focus on shared goals between China and the US as opposed to its differences. He said sharing mutual interests like being members of the United Nations Security Council is just one of the many ways that the country cooperates with each other for the benefit of the world.

Cui said that beyond cooperation, he wants the world to know that China’s aim is to improve the lives of its people.

“What is China trying to do?” Cui said, “China, an ancient nation, is trying to modernize itself.is trying to develop itself, so people could have a better life. Abraham Lincoln, a native Kentuckian, stands for a government of the people, by the people, and for the people. We innow stress people-centered development. People's aspiration for a better life is our goal. This is the only goal for China.”

Cui said China’s challenges are numerous – including a low GDP, nearly 30 million people living in poverty, and 80 million people with disabilities. So, China is working on domestic development to give its citizens a better life.

To make this happen, Cui said China is opening itself up and that cooperation with countries like the US is the only way to realize the “Chinese dream” of reform and opening-up.

“This year marks the 40th anniversary of China's reform and opening-up,” Cui said. “We have made great achievements over the last four decades, but still there is a long way ahead of us before we can really reach our goal. And in order to do this, we seek cooperation with other countries.”

Cui also stressed that economic relations between China and the US should not be a “zero-sum game” and that both nations need to work on the “big picture.”

“Our two countries and maybe other countries in the world have to work together and make sure that the new wealth generated by globalization will benefit more countries and more people in each country rather than make the rich richer and the poor poorer,” Cui said.

Cui said the goals of both nations require more than a simple country-to-country relationship – it needs people-to-people connections as well.

“We need people in Kentucky, in Chinese provinces and in other US states to be great partners,” Cui said. “We need to work together. And in the long run, maybe 10 years from now, we can tell the people then that we have made the right choice, we have made our contribution to the relations, and that we have brought real benefit to our two peoples.”