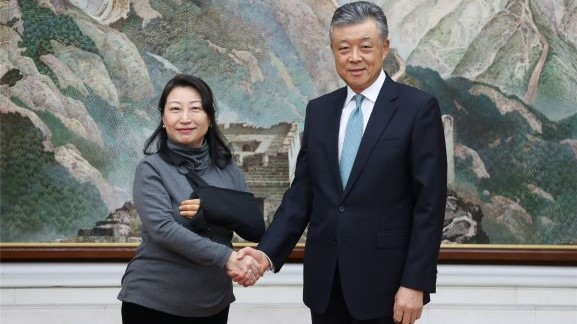 Chinese Ambassador to the UK Liu Xiaoming on Wednesday expressed hope for a better understanding from the international community of the Chinese government's stance on the Hong Kong issue.

Liu made the remarks during a meeting with the Secretary for Justice of the Hong Kong Special Administrative Region (HKSAR), Teresa Cheng, in London.

Cheng was pushed to the ground and injured last week after being mobbed by angry protesters outside an event in central London.

Once again, Liu conveyed the solicitude of the leaders of the Chinese central government and wished Cheng a speedy recovery.

Liu noted that the incident showed that the anti-China elements seeking to disrupt Hong Kong are taking violence abroad and into the UK.

Liu recalled that at his third press conference on the Hong Kong crisis, he had expressed hope that the international community would recognize the nature of Hong Kong's extreme violent offenders and better understand and endorse the Chinese government's position to firmly support the HKSAR government, the local police and the judiciary in ending the violence and restoring order, and to unswervingly safeguard national sovereignty, security and development interests.

He said that China will implement "One Country, Two Systems" firmly and oppose external interference in Hong Kong affairs.

Liu emphasized that the motherland is the staunch supporter for Hong Kong. He hoped that Hong Kong will end violence and restore order as soon as possible and seize the opportunity of the Guangdong-Hong Kong-Macao Greater Bay Area and the Belt and Road Initiative to achieve better development.

Cheng thanked senior officials for their care and support, and the Chinese embassy for its assistance.

She said some Western media have published distorted reports on the attack and she would clarify the facts through a press conference and reveal the ugly faces of the anti-China elements seeking to disrupt Hong Kong.

Hong Kong has gone through winds and rains and is highly resilient, she said. She believed with the strong support of the central government, Hong Kong will certainly be able to overcome the current predicament and usher in a better tomorrow.