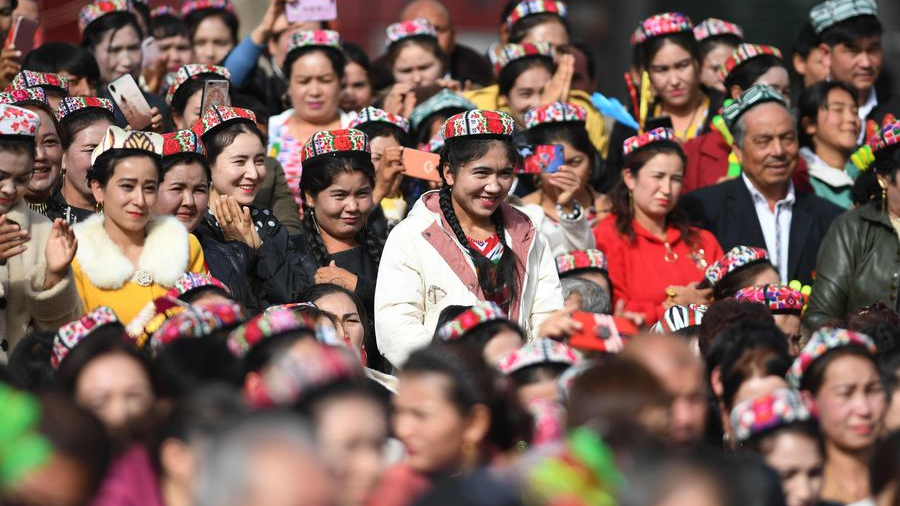 Zhang Ming, head of the Chinese Mission to the European Union (EU), on Tuesday warned the bloc against imposing sanctions on Beijing over northwest China's Xinjiang Uygur Autonomous Region, and urged the EU to reject fake news and lies concerning Xinjiang.

"I want to emphasize that sanctions are confrontation. Sanctions based on lies could be interpreted as deliberately undermining China's security and development interests," Zhang said in a videoconference with the Brussels-based think tank European Policy Center.

"We want dialogue not confrontation. We ask the EU side to think twice. If some insist on confrontation, we will not back down, as we have no option but to fulfill our responsibilities to the people of our country."

The EU is set to debate sanctions on four Chinese officials and one entity over Xinjiang, according to EU diplomats. The measures will be submitted to EU foreign ministers for approval next week when they meet to prepare for the EU summit from March 25-26 to decide the bloc's strategy toward China.

Zhang said he has noticed the report and expressed grave concern on it.

"We have always advocated non-interference in other countries' internal affairs, opposed the erroneous approach of resorting to sanctions, and opposed reckless fabrications that ignore the facts," Zhang stressed.

The Chinese government has launched anti-terrorism and de-radicalization efforts in Xinjiang in accordance with the law to protect people's lives, he said.

Pointing out that the essence of Xinjiang-related issues is counter-terrorism and de-radicalization, Zhang said the region is faithfully implementing the UN Plan of Action to Prevent Violent Extremism.

It also draws lessons from similar practices in other countries to carry out de-radicalization in accordance with the law, and it is in full compliance with the principles and the spirit of the UN Global Counter-Terrorism Strategy, he continued.

Xinjiang has not reported any case of violent terrorism for more than four consecutive years, Zhang said, adding that the region enjoys social stability and steady progress, and people enjoy their lives and work.