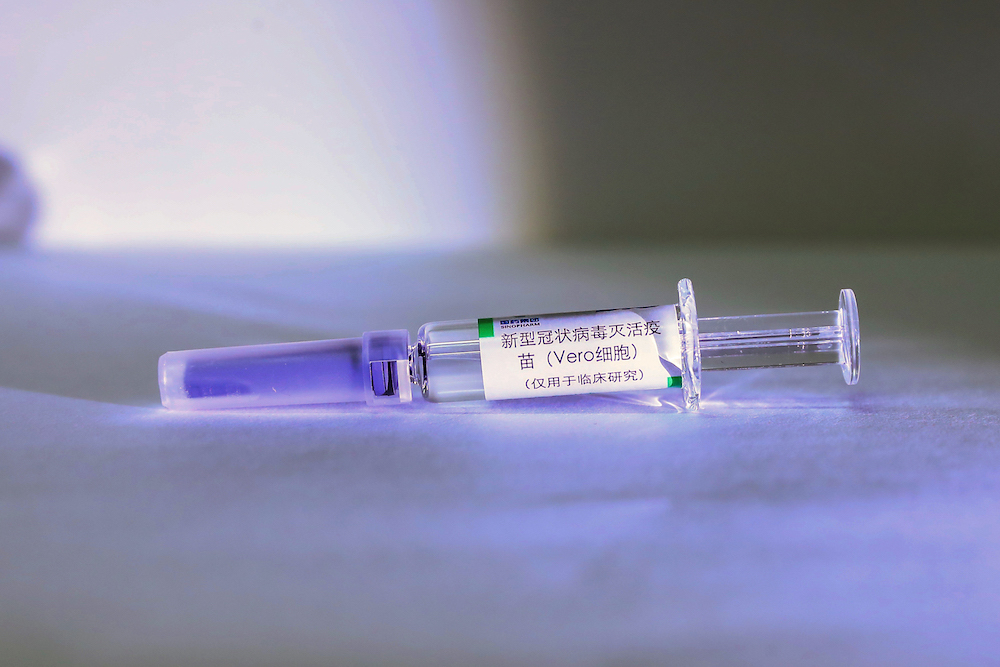 A sample of the COVID-19 inactivated vaccine is seen at a vaccine production plant of China National Pharmaceutical Group (Sinopharm) in Beijing, capital of China, April 10, 2020. (File photo: Xinhua)

CanSino Biologics' top scientist said on Wednesday that its vaccine candidate for COVID-19 is generally safe and effective, reassuring investors after clinical trials for the same type of vaccine developed in the United Kingdom were paused when a participant was suspected of having a life-threatening adverse reaction.

On Wednesday, the Phase 3 clinical trials for the UK vaccine, developed by Oxford University and biotech company AstraZeneca, were shut down across the globe after a woman in the UK trial experienced symptoms similar to a rare but serious spinal cord inflammatory disorder called transverse myelitis, according to United States medical news website Stat News.

The volunteer's diagnosis and the cause of the illness have not been confirmed, but she is reported to be improving and will be discharged soon, the outlet quoted AstraZeneca's CEO Pascal Soriot as saying. Meanwhile, an independent investigation is working out if there was any link between the disorder and the vaccine.

The Medicines and Healthcare products Regulatory Agency in the UK will decide soon if the trials can be restarted. The candidate's trials in the UK, Japan, Brazil, South Africa and the US have been suspended.

Zhu Tao, the chief scientist for CanSino Biologics, reassured investors in a meeting on Wednesday that the Chinese vaccine candidate jointly developed by the company and noted biomedical expert Chen Wei is generally safe and effective, and no serious adverse reactions that require medical attention have been reported.

The Chinese recombinant adenovirus vector vaccine, dubbed Ad5-nCoV, uses a weakened and modified common cold virus as a vector to introduce parts of the genetic material of the novel coronavirus into the body, training it to recognize and fight off the disease.

Zhu said the Chinese and British vaccine use the same technology, so people often compare the two, but there are subtle differences oblivious to the untrained eye.

For example, the adenovirus for the Chinese vaccine came from a human, while the vector for the British vaccine came from a chimpanzee. The two viral vectors are highly similar, given human's genetic similarity to chimpanzee, but their differences are poorly understood and are still being studied.

"It may ultimately come down to preference, cost and availability," said a Beijing biology professor who requested anonymity. "Scientists have long used the chimpanzee-derived viral vectors because humans have little exposure to these viruses, and thus our immune system will be less likely to attack these harmless vectors, ensuring the vaccine's potency."

"On the other hand, human-derived viral vectors may be safer since they came from our body, but it also means more people may have immunity against these vectors. So the vaccine may not be as effective per dosage, and certain demographics, such as the elderly, may need booster shots," the professor said.

Zhu said the Ad5-nCoV is expected to provide two years of protection, and current evidence said one dose is enough to trigger an adequate immune response, but two doses can further enhance protection. The target demographic for the current vaccine is above age 18, and they are also working on a version that can be given to the 6 to 18 age group.

In response to concerns of the vaccine's safety, Zhu said some may have misread the Chinese findings as different vaccine developers are using different testing standards, definitions and viral strains, which can sometimes lead to confusion if not read carefully.

According to the British medical journal the Lancet, the Phase 2 trials of the Chinese vaccine found 9 percent of the 253 volunteers who had received high dosages of the vaccine, as well as one person out of 129 volunteers in the low dosage group, reported having "Grade 3 severe adverse reactions".

However, the Grade 3 category in the Chinese study mostly referred to fever so scientists could differentiate it from skin irritation and other minor reactions. The study said the Grade 3 reactions were "self-limited and resolved within three to four days without medication".

In conventional clinical trials, side effects are graded on a scale from 1 to 5, with Grade 3 effects being severe reactions that require medical intervention, Grade 4 being life-threatening and needing hospitalization, and Grade 5 being fatal, according to the US National Cancer Institute.