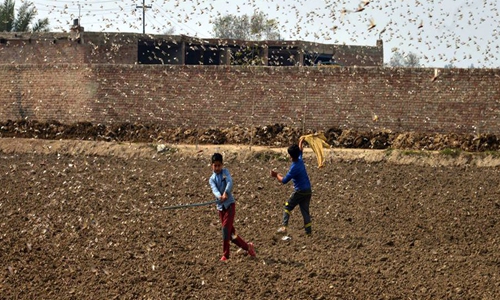 China is preparing to send an army of 100,000 ducks to Pakistan to help the country exterminate the locust plague that has been posing a huge threat to the country's agriculture. The estimated time of deployment is the second half of this year.

The main measure currently being used to tackle the locust plague in Pakistan is still spraying pesticide by aircraft, while the duck solution remains an exploratory subject and has not yet been included in the current official plan, experts said.

Ducks are natural enemies of locusts, will not pollute the environment like pesticide and can lay eggs after having accomplished their mission, experts said.

The duck legion from Shaoxing, East China's Zhejiang Province, are veterans who wiped out the locust outbreak in Northwest China's Xinjiang Uygur Autonomous Region 20 years ago, Li Guowei, head of Guowei Poultry Industry in Zhuji, Shaoxing, which provided the ducks, told the Global Times on Thursday.

Locust plagues can be controlled with pesticide or through biological methods, but the latter is preferred because it is more cost efficient, does not pollute the environment and can restore the biological chain, Lu Lizhi, a research fellow at the Zhejiang Academy of Agricultural Sciences, who is directly involved in the duck deployment plan, told the Global Times.

Ducks are also considered superior to frogs, birds or chickens, as they like to live in groups, have a strong ability to survive in the wild and are easy to manage, Lu said, noting that frogs and birds are less disciplined and cannot follow locusts into new areas.

The ducks are very productive when they grow up, so after they accomplish the locust extermination mission, they can bring about economic value by laying eggs which can make delicious food, Li said.

The duck legion can be transported by aircraft and arrive in Pakistan in a day, the Ningbo Evening News reported.

Lu said they still need time to set up a technical protocol with Chinese and Pakistani experts and calculate the best time to send the ducks in order to bring about the best result.

"We hope to perfect the technology of using ducks to control locusts and then export the technology to Pakistan, helping them control the locust plague. We will not only apply the technology in dealing with locusts in our country but also promote the technologies in countries involved in the China-proposed Belt and Road Initiative," Lu said.

Pakistan will send personnel to China to learn the technology in Xinjiang first. The ducks from Shaoxing will be sent to Pakistan as early as later this year or early next year, Lu said.

Currently, Pakistan is still mainly using pesticides to control locusts, but hope to increase the proportion of biological methods, which are more environmentally friendly as well as economically beneficial to the country, Lu said.

A group of Chinese agricultural experts arrived in Pakistan on Monday, and will be providing technical support for locust plague control and jointly work out an action plan with the Pakistani government to prevent another possible outbreak later in April.

Zhang Long, a member of the expert group, said that spraying pesticide from aircraft on a large scale remains the top choice, as ducks can only have a limited effect on a locust outbreak of such a large scale in Pakistan, China Central Television reported on Thursday.

Using ducks against locusts is a measure being explored by Chinese scientists, and has not yet been included in the current official plan to aid Pakistan, said Wang Fengle, leader of the expert group.

Pakistan declared a national emergency over the locust invasion earlier this month.