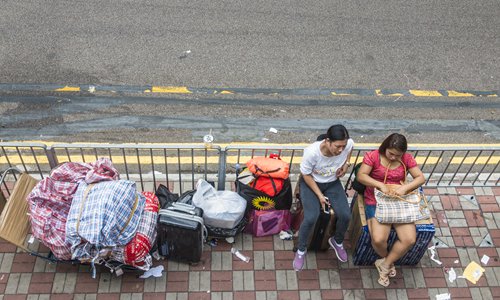 Two Filipino maids chat with each other on a street in Hong Kong in June 2017. (Photo: IC)

Personal information of more than 40 maids is listed on the webpage of the Beijing-based agency Favorite, including maids not only from the Philippines but also Myanmar and Indonesia."I am single and I graduated with a bachelor's degree with a secondary degree in mathematics," 24-year-old Marsh from the Philippines said, introducing herself in English in a video clip."I do love children…I'd love to take care and teach them English or any subjects they want to learn," she said.Known as "the world's most professional helpers," Filipino maids are usually well-educated and well-trained for home service, and their English capability is considered a main advantage by Chinese parents for their children, increasing the demand for Filipino maids, even though working in the Chinese mainland is not legally protected. Taking risksScreening their resume and taking a video interview always come first in the process of hiring a Filipino maid in China. Favorite is one of many agencies in the Chinese mainland waiting to earn profits from introducing Filipino maids to Chinese families. The commission fee for the agency can reach to 50,000 yuan ($7,309), as the agency has to help recruit Filipino maids for a potential employer, the Beijing Youth Daily reported. Agencies reached by the Beijing Youth Daily said Filipino maids have to apply for a tourist visa valid for two months the first time they come to Chinese mainland. If Chinese families want to apply for long-term visas for them, they have to pay more. Even so, Filipino maids risk being deported for working on incorrect visas, because the families cannot get them proper working visas as housekeepers. The salary offered by families in the Chinese mainland is much higher than that of Hong Kong, the Beijing Youth Daily reported. Fangfei, a staff member of a housekeeping company, told the Global Times that the salary of a Filipino maid in the Chinese mainland is at least around 5,000 yuan per month with an extra fee of 20,000 yuan for the agency.Only foreign people working at foreign embassies are legally allowed to hire foreign maids, staff of the Beijing Exit-Entry Administration of the Municipal Public Security Bureau said when reached by Global Times on Tuesday."Without a legal working visa, they will be checked and penalized," she said.Several families in Beijing with a Filipino maid refused to talk when reached by the Global Times. "It is sensitive topic," they said.Anticipating change"They have a good reputation for doing good work. They are fluent in English and the salary is reasonable," 28-year-old Chloe Xu, a typical white-collar worker in Beijing, told the Global Times. "I would definitely hire a Filipino maid if policy allowed it and if I was financially capable," she added. Multiple white-collar workers under 30 living in Beijing, South China's Guangdong Province and East China's Jiangsu Province hold the same opinion as Xu. A monthly salary of around 8,000 ($1,176) to 10,000 yuan for a possible Filipino maid is acceptable to them.It is estimated that there are more than 100,000 Filipino maids working in families on the Chinese mainland, reports said.Chinese residents have been talking about a possible legalization of foreign home service workers since 2017, when officials from both China and the Philippines discussed a possibility where Filipino maids are allowed to work in five cities on the Chinese mainland, including Beijing and Shanghai.Liu Kaiming, director of the labor rights-oriented think tank Institute of Contemporary Observation, told the Global Times that the policy is under review at related departments and he believes the policy will take effect "within the next two months this year," and a salary threshold of 13,000 yuan per month would be set.Staff of Shanghai-based agency Mangguoayi, or Mango Aunt, are also confident about the arrival of the policy. "The new policy is expected to take effect around the end of the year," she said.Maid employers would also have to purchase insurance for the maids, she said.According to the agency's staff, a unified wage scale for Filipino maids will be set by the government, which would be around 6,000 to 12,000 yuan per month.The number of visas issued to Filipino maids will be limited, and customers have to queue up at the agency for a future hiring, she said.