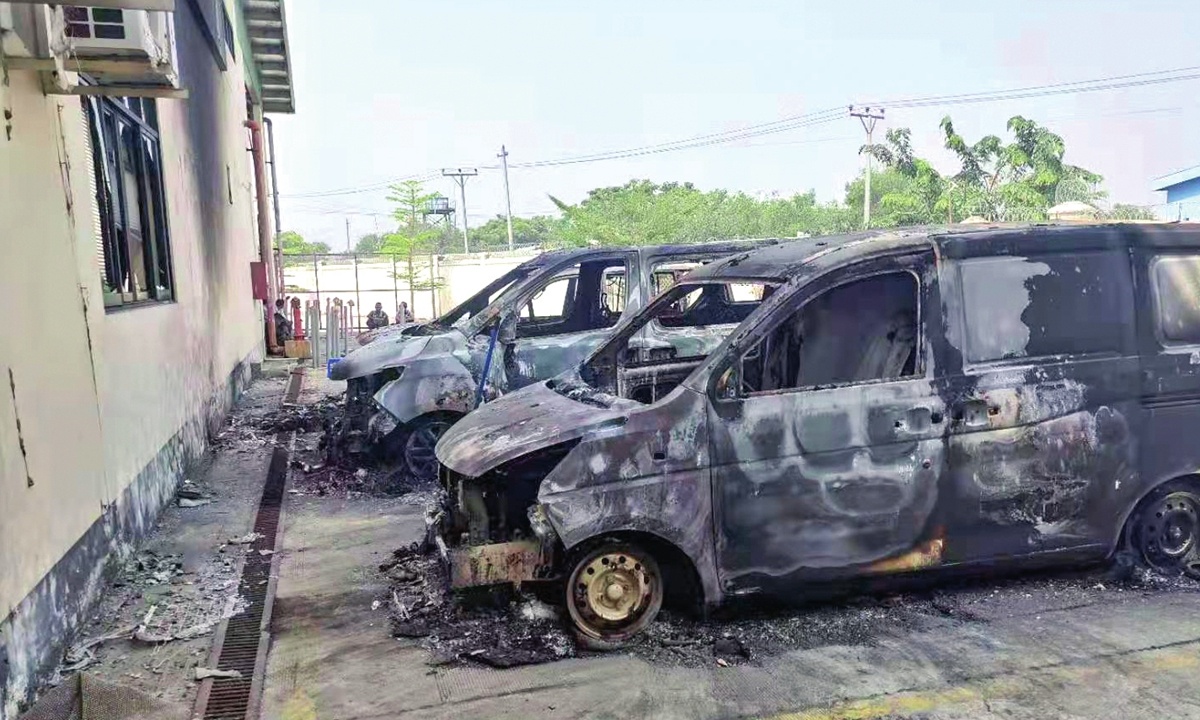 Cars are burned down at a China-invested factory in Yangon, Myanmar. (Photo: Interviewee)

Ever since Chinese factories in Myanmar were looted and set on fire over the weekend, more and more outrageous rumors have been infested on Myanmar's social media.

A rumor that the Chinese-owned Xing Jia Shoe Factory, located in Hlaing Thar Yar, Yangon, cooperated with Myanmar's military to trap and kill local workers, resulting in at least five deaths and many arrests, has been widely circulating on Twitter and Facebook since Wednesday.

However, a management staff of Xing Jia Shoe Factory on Thursday told the Global Times that the claim was "100 percent a rumor" and the closed circuit television (CCTV) system in the factory can prove it too.

On Twitter, Facebook and other social media platforms, the rumors were mostly posted by ordinary people in Myanmar.

There are many versions of the rumor, in various portrayals, but the core content is basically the same.

Taking a post from Twitter user Ro Nay San Lwin, who is officially recognized as a co-founder of a social organization "Free Rohingya Coalition," for instance, the rumor said that "Workers were called to collect their salaries, but were locked inside the factory by the factory management on Tuesday,"adding that "workers asked for help from outside, but factory management sent misinformation to the authorities that workers were protesting. Myanmar security forces then came and opened fire, causing at least 5 men to be shot dead." 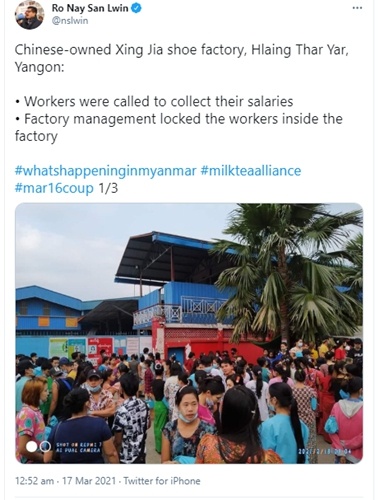 Moreover, a WeChat account named "miandiannews" also released news on Wednesday which claimed that some workers were shot dead when they went to a factory to collect their salary. The account apologized on Thursday morning, saying it "used false information circulating online without verification, which led to a serious misrepresentation in the report."

A management staff of the shoe factory, who asked not to be named, told the Global Times that the information on social platforms like Twitter and Facebook are "100 percent rumors."

"Some military personnel came to the factory and learned about the attacks, but no outsiders were brought to our factory, there were no killings or deaths. We have CCTV system as well, which can definitely prove that," he said.

Instead of "cooperating with the Myanmar military to kill the workers" as the rumor had it, the factory went through multiple waves of burning and threatening from rioters amid the attacks, according to the staff. He and his colleagues, both Chinese and Myanmar nationals, have been living in intense fear and emotional distraught through the past three days.

He said that there were about 20 Chinese people in the factory, a dozen Myanmar interpreters and two or three Myanmar management staff on March 14. When they tried to go downstairs together to put out the fire, the rioters outside began to hack at the gate of the factory with knives.

The rioters climbed on the gate and threatened the workers that, if they were to start work, they would smash and burn the factory, the staff said. "At that time, our Myanmar management staff and interpreters were all in tears because of fear. They explained to the mob that we were on holiday and not working, and begged the rioters to let us all go. But the rioters continued to threaten us, clamoring that all Chinese should get out of Myanmar," he said.

Another wave of mobs, with air rifles and slingshots in hand, came and began destroying the factory's glass and lights after they put out the fire, the management staff recalled.

"We all hid in a safe place in the factory after seeing them holding guns," he said. "These guys, like the previous ones, threatened us not to work and to get out. We were very scared. None of us had ever come across things like this before."

The management staff told the Global Times that all the translators and Myanmar workers at the factory ran away in the early Monday morning, only leaving some 20 Chinese people there. "The factory's Chinese personnel thought it was no more than a false alarm at first, as the mobs didn't frighten or threaten them anymore that day," he said.

But to their surprise, a third wave of rioters with knives and steel pipes came to the factory around 2pm Tuesday. The rioters were dispersed [for a while] by local police who fired warning shots at them. Some five minutes later, as the manager recalled, "there was fire and smoke from about five or six factories within 500 meters of our factory."

This area was soon put under lockdown, the staff said. "We were all too scared to stay in the factory and wanted to go somewhere safe," he added. "The language barrier meant we did not even know how to communicate with them and ask for mercy."

The timeline the manager described was consistent with the rumors online, the Global Times found. The rumors, therefore, were likely to be fabricated based on similar narratives of the management staff or other insiders.

The management staff said he and his colleagues did not know about the rumors until Wednesday. "Many Facebook accounts, and WeChat accounts including 'miandiannews' had published many misinformation about our factory," he said. "They said we 'asked employees to kill people in collusion with the Myanmar army and police, and we 'put the dead bodies in the factory'..."

He condemned these rumors as groundless slanders. "We have no idea who is behind the scenes, neither do we know what their intentions are to call white-black," he told the Global Times.

He said that while CCTV outside the factory had been thwarted by rioters, the one inside the factory was fully vindicated. "We have not seen anything like this happen around our factory. Such a claim is totally unfounded."

Ro Nay San Lwin's rumored tweet posted a picture of dozens of local Myanmar workers outside a factory, but it shows the photo was taken on February 18, which is apparently inconsistent with the time of incident mentioned in the post.

"We were working normally that day, when suddenly a group of Myanmar locals from outside the factory asked our employees to leave the factory and join them in a sit-in. We did not dare to stop them. This picture was probably taken at that time," the management staff explained to the Global Times.

In recent days, the vicious rumors made the management staff, who was already upset by the factory attack, feel even more terrible. "Now it has spread so seriously on the internet, and personal attacks on us are very frequent. We have no recourse now and we don't know how to clarify this matter. We feel so helpless and so wronged that it has taken a great toll on us, both physically and emotionally."

Asked if he still had confidence in making investment or running business in Myanmar after the incident, the management staff said he had almost psychologically collapsed. "To be honest, we are here out of a sense of responsibility because the company trusts us. But if we could go back, I would never want to come back again," he said.