As the Longtui 603 ship offloaded a thousand tons of soybeans at a wharf in Fuyuan, Northeast China's Heilongjiang Province, on October 18, it marked the first shipment of soybeans grown in Russia's Far Eastern region by a Chinese company, Dongjin Group.China is trying to find alternative suppliers to replace US soybean as China's soybean imports declined by 2.1 percent from January to August year-on-year. Currently,  70 percent of the total amount of soybean imports come from Brazil, the Ministry of Agriculture and Rural Affairs said recently. This may bring an opportunity for China and Russia to explore further agricultural cooperation along their border areas. Russian President Vladimir Putin recently vowed to develop the country's agricultural sector and rural areas, and he believes China-US trade friction gives Russia new opportunities to enter the Chinese market, TASS news agency reported. For example, Russia has already made one million hectares of arable land available to foreign investors this year. "There is a great demand for soybeans in China at present. We plan to export more soybeans from Russia's Primorsky and the Jewish Autonomous Region to the grain wharf in Fuyuan," said Denis Viktorovich, the CEO of the Regional Agricultural Fund in Khabarovsk, Russia's Far East. Soybean farms in RussiaDriving 19.3 kilometers from the city center of Khabarovsk, this Global Times reporter arrived at the Sergeyevka farm where the Dongjin Group was harvesting soybeans. This is the busiest season on the farm. Four large-size harvesters with 358 horsepower had been reaping the soybeans since early morning, with several trucks waiting to be loaded. According to Liu Xinghai, the manager of Dongjin Group's Russian Far East Farm, the region suffered the earliest frost in a decade this year, which had a bad influence on soybeans. Even so, the ideal yield can reach around 3,000 kilograms per hectare. Due to the strict planting standards and supervision, the non-GM [genetically modified] soybeans grown in the region are of high quality with a protein level of around 43 percent. On the three farms owned by Dongjin Group in Russia's Far Eastern region, over 60 percent of its employees are local people. Artur, 26, came down from a tall harvester to take a break amid the hectic working pace. Dressed in the company's dark blue uniform, this young man chatted with his Chinese colleague. He fits in beautifully with other Chinese staff on the farm. "Before the Chinese came, our workload used to be very little. Of course, our income was low. I could only get 25,000 rubles ($382) per month in the past, but now my salary can reach 60,000 rubles," he told the Global Times.  However, things were not easy at the beginning. Liu said due to the different mentalities, Russian workers did not agree to work overtime at the beginning. "Our Russian staff always work on the dot. They believe they must get off work on time and shouldn't work on weekends," Liu said. "After we came, we explained to them that seasonal variation is very important for agriculture. Sometimes, we have to harvest quickly." After careful negotiations, Russian employees understood how the Chinese company works. Meanwhile, they could get higher wages and better benefits. As the largest foreign owner of farms in Russia, Dongjin Group started exploring the region's potential in March 2017 and has so far leased 120,000 hectares of farmland in Khabarovsk. Some 30,000 hectares are used for growing soybeans with 80,000 tons of soybeans predicted to be harvested this year, according to Zhang Dajun, chairman of the company. In addition, the company hopes to expand its arable land for soybeans to 200,000 hectares by 2021, said Zhang. "Soybeans will remain the major crop grown in Russia by Dongjin Group, as a diversified strategic supply of soybeans for our nation. In addition, oats and other grains will be planted on the farms," he added. 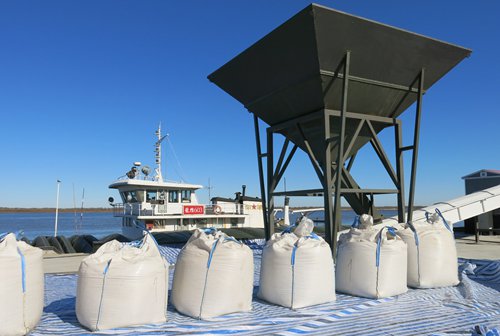 The first shipment of a thousand tons of soybeans is offloaded at a grain wharf in Fuyuan, Northeast China's Heilongjiang Province on October 18.

Agricultural cooperation The image of cross-border agricultural cooperation between China and Russia has changed dramatically. In the past, most of the Chinese who came to Russia for agricultural cooperation were from small-sized companies or farmers. Their equipment, technology and administrative level were not advanced, and some even violated the local law. Zhang noted this is the reason why Russians didn't show great confidence in Dongjin Group when the company came at first. One of the reasons for the underdevelopment of Khabarovsk is its backward agricultural technology. When Zhang came to the farm in March 2017, he saw old equipment from the 1960s. "That equipment could be displayed in museums. Almost none of it worked!" Zhang said. Everything started from the scratch. Within less than one year, an 18-meter wide machine for planting crops stands on the farm. The manager of the farm said the planter can seed 150 hectares within eight hours. The advancement of mechanization also generates local demand for professional and technical personnel. Viktorovich said the local Russian government is planning a program to train a great number of agricultural technicians at local universities and technical schools.

Zhang added that with more land to be exploited, the company needs more people who can operate the equipment. "We plan to train over 300 technical personnel to operate our equipment every year, which can improve local employment," he said. 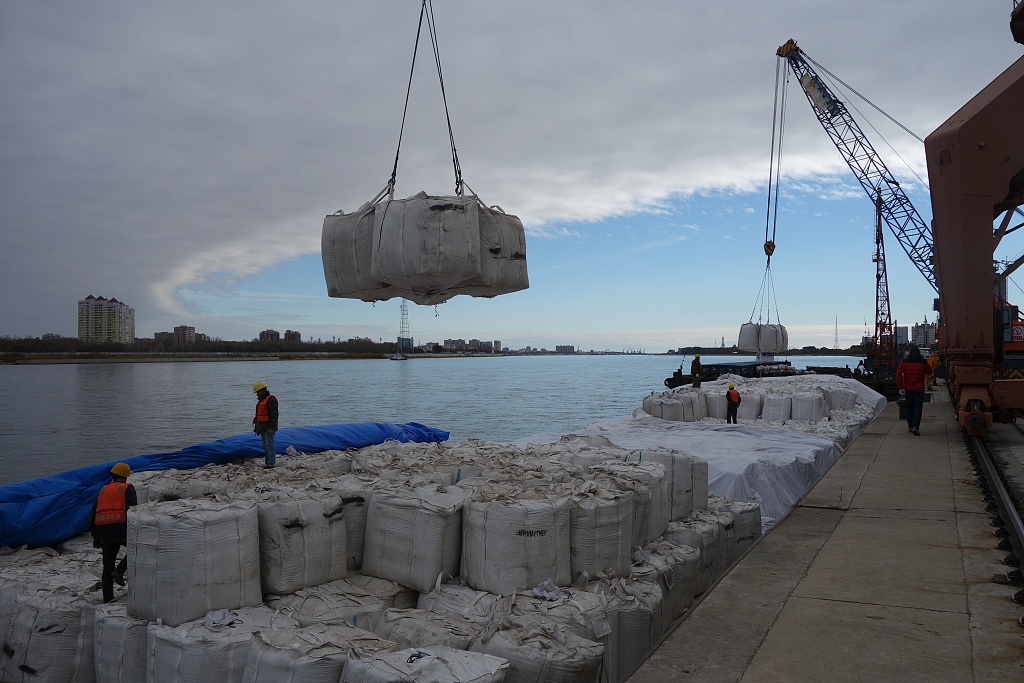 File photos: VCGRevitalizing border areasKhabarovsk is one of the largest cities in Russia's Far Eastern region, located 30 kilometers away from the Chinese border. Due to its vast areas of undeveloped land, there is a huge potential for the two countries to cooperate and revitalize both border areas. Valery Dubrovskiy, director of investment for the Far East Investment and Export Agency, said in August that several Chinese companies had already expressed interest in planting grain on the one million hectares of arable land available to foreign investors in Russia, the South China Morning Post reported. "We expect most of the investment to come from China," Dubrovskiy added.The Russian business community wants to grasp the opportunity as well. Russian business representatives expressed high interest in expanding the food trade with China during the recent fourth Eastern Economic Forum (EEF) held in Vladivostok, a city in the Russian Far East, the Global Times reported previously. Some of those participants said they expect more investment from China in Russia's agricultural sector. Moreover, agriculture in Russia has been an increasingly important part of the economy in recent years. Putin said in March that agriculture made more money for Russia than weapons exports, Russia Today reported. However, at present, only one percent of China's food imports come from Russia, Maxim Basov, CEO of Russian major agricultural company Rusagro Group, told the Global Times in a previous interview.Russia's attempts to develop its Far Eastern region and to attract foreign investors correspond to China's demand for soybeans and wish to revitalize its Northeastern region. According to Zhou Fuqiang, deputy director of the Fuyuan Bureau of Commerce, 20,000 tons of soybeans will be shipped to the Fuyuan wharf from Russia's Far East this year, contributing $6 million to the local economy. In order to meet the opportunity, Fuyuan is going to build a processing and distribution center for soybeans, aiming to bring over a million tons of soybeans from Russia and achieve an output value of 10 billion yuan. The shareholders of Dongjin Group used to have doubts about Russia's policy and investment condition. They were concerned about their investment in the agricultural industry at the beginning, Zhang said. "But they felt reassured after visiting the farms." 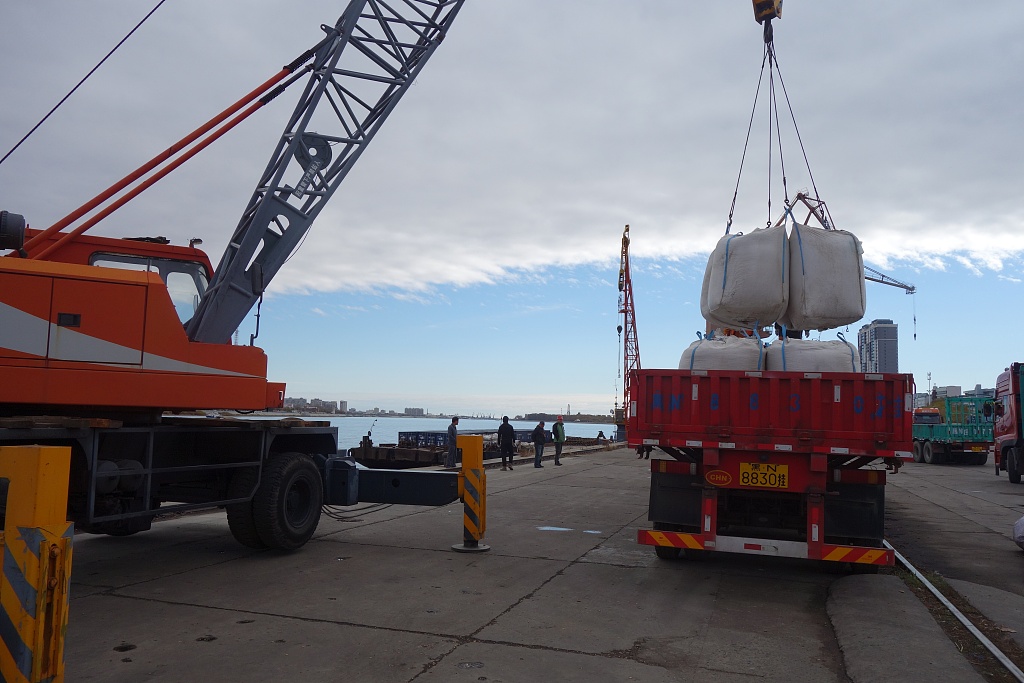 Unnecessary worry Chinese companies and farmers have planted grain in Russia's Far Eastern region for over 25 years. Some people are concerned that "Chinese are buying Russia." However, such prejudice may make the region miss out on the opportunity for further development to promote its economic competitiveness, Andrey Ostrovsky of the Center for Chinese Economy and Social Studies at the Institute of Far Eastern Studies of the Russian Academy of Sciences told the news website cankaoxiaoxi.com.Taking Dongjin Group's farming in Khabarovsk as an example, Viktorovich,  the CEO of the Regional Agricultural Fund, told the Global Times that Russia has vast territory and abundant resources, while the cultivated area of Dongjin's farms in Russia's Far East is very little. "We welcome Chinese investors. We welcome investors from all other countries. It will be easier for us to carry out international cooperation," Viktorovich said. Soybeans grown in Russia may not replace US soybeans in the short term, but the cross-border agricultural cooperation between China and Russia's borders has a huge potential and big future to explore. Moreover, both countries hope to and have great potential to revitalize their border areas, probably based on the demand for soybeans.