Chinese firms can handle US blockades 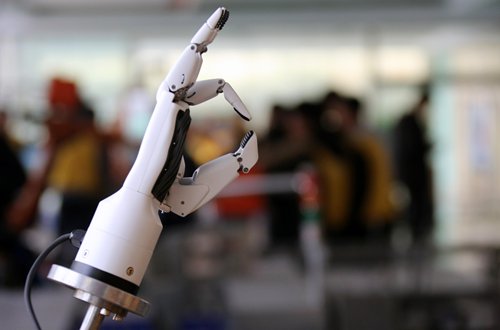 A robot arm makes the sign for "OK" at a robot industrial park in Zoucheng Economic and Technological Development Zone in Jining, East China's Shangdong Province in December 2018. The zone specializes in robotics, and has a complete industrial chain that integrates R&D innovation, support services and business incubation. (Photo: VCG)

Chinese companies, whether state-owned or private, enjoy research and development self-reliance despite the possibility of increased US pressure on them due to the escalating trade war, Chinese analysts said on Monday.But they also said that not every Chinese firm has the same capability as Huawei, so they need to increase their technological input and diversify their cooperation with companies from other countries and regions.Since the US launched its first strike on ZTE on the electronic chip issue last year, many Chinese firms have realized the importance of self-reliance, especially in technology, said Bai Ming, deputy director of the Ministry of Commerce's International Market Research Institute. Bai told the Global Times that "the US is actually reminding Chinese firms through the trade war, especially those in the IT industry, to strengthen their self-reliance. So when it used a similar approach on Huawei, it didn't get what it wanted, and Huawei stands still."The escalating trade war will surely improve Chinese companies' self-reliance and innovation capability, said Lü Xiang, a research fellow on China-US relations at the Chinese Academy of Social Sciences.The State-owned Assets Supervision and Administration Commission (SASAC), on its account on China's Twitter-like Sina Weibo On Saturday, expressed confidence over the self-reliance of Chinese firms in research and development.The SASAC mentioned an incident that happened on the 2018 Made in China (December 26) day, when many Chinese state-owned companies expressed their confidence and determination to overcome potential restrictions on technology cooperation with other countries and regions.Technology is a key issue in trade talks between China and the US, and because of the technological advantage of the US and other Western countries, some concerns have been raised in China about the country's capability to handle restrictions or even blockades on technology cooperation by the US and other Western countries.China Railway Construction Corporation Limited (CRCC) said on Weibo that "In the past, we had to import tunnel boring machines (TBMs), and relied on foreign experts to fix the machines, and they didn't allow us to have a look at all. So what? We started from scratch and eventually built our own TBMs.""Now China-made TBMs occupy two-thirds of global market share and we have forced foreign competitors to decrease 40 percent on the price of their products." China National Nuclear Corporation said on Weibo that "Restrictions? China's nuclear program started in an environment of blockades and sanctions! We used the abacus to figure out issues about nucleons. The success of China's nuclear program is the best example of China's capability to deal with a technological blockade."China Aerospace Science and Technology Corporation said "At the beginning, we didn't even have a chance to look at other countries' satellites. But now, we sent Chang'e-4 to land on the far side of the moon."Bai said that many state-owned enterprises are closely related to national strategies and security, so they have government support to make sure they survive and succeed, but many non-state-owned companies don't have such resources.Among Chinese non-state-owned companies, not every company has Huawei's capability to withstand pressure from the US, because Huawei spent a lot to prepare for the challenge, Bai noted. "Huawei invested heavily in technology. This allows the firm to have a back-up plan."Aside from a technological reserve, firms also need to diversify their technological cooperation and crucial imports from other countries and regions, Lü said. "That would allow them to find an alternative as soon as possible when a major partner cut off ties."Just like self-reliance, the demand for innovation is also huge, observers noted. The Chinese government needs to increase support to companies, whether state-owned or private, to improve their talent cultivation and R&D capability, so that they can handle the potential threats from the trade war, the observers said.