Chinese firms may face hurdles in plans for autonomous taxis 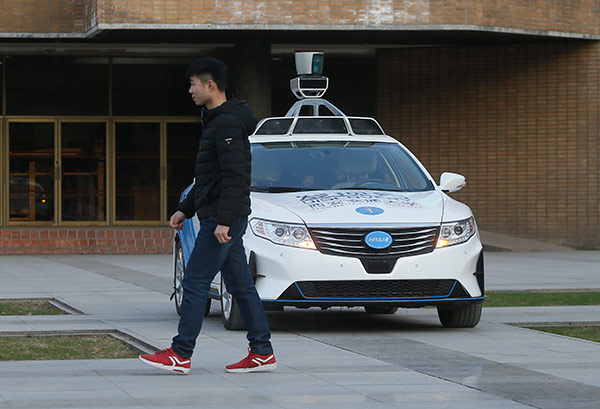 A self-driving car prototype developed by Xi'an Jiaotong University. The car can avoid obstacles and back into a garage automatically. China Daily/Zhang Jie

Autonomous taxi services are fast emerging as feasible business models for commercializing driverless technologies. However, aspects like insurance, maintenance and parking fees, are widely seen as limiting factors for such services.

"A growing number of companies are jumping on the bandwagon to deploy self-driving taxi services. They will need to take different paths to achieve their goals," said Zheng Fangdan, a senior consultant at Chinese research company CCID Consulting.

"Bigger, well-funded companies, like Baidu Inc, have the capability to operate their own taxi fleets. Smaller firms could outsource operations and maintenance to taxi companies, which would increase the efficiency. Startups, who are eyeing a piece of the business, could position themselves as suppliers to meet the needs of large clients," Zheng said.

In the early stages, the requirement of a safety officer in each taxi decreases the economic efficiency of this mobility solution, Zheng said.

"As safety officers need specialized training, the operating cost of such autonomous vehicles would be higher than traditional taxis."

Research company Topology Research Institute estimated that the compound annual growth rate of an autonomous taxi, or a robot taxi, would exceed 81 percent between 2018 and 2023.

Their comments came as China has been working to clarify the legal landscape for autonomous vehicles, which are in the fast lane to commercial availability.

Beijing became the first Chinese city to allow companies to try out the technology on its streets, as regulators are working to keep pace with the government's push to compete in the sector.

China, which already has a high density of electric vehicle chargers, has strong hopes for autonomous vehicle technology, according to a report released by consultancy firm KPMG.

"China can position itself as a world leader, with expectations that autonomous vehicles will be capable of being deployed by 2025 or 2030," Philip Ng, a partner at KPMG in China, wrote in a research note. "Key drivers include the scale of China's auto industry as the largest market in the world by production and sales and its focus on technology and innovation, supported by the 'made in China 2025 plan'."