CHINA Chinese firms race to upgrade amid trade war with US

Chinese firms race to upgrade amid trade war with US 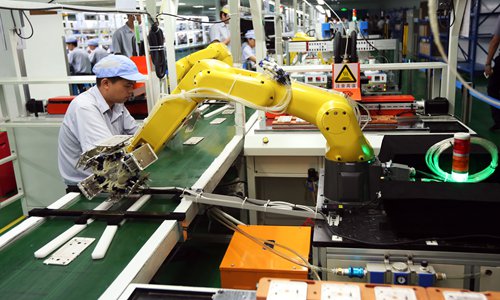 Chinese manufacturing companies are under pressure to speed up their industrial upgrading as the ongoing trade dispute between China and the US is squeezing the profitability of low added-value products. The trade dispute could help Chinese manufacturers to understand the need for high-quality manufacturing and to re-examine their business model, said Shi Jiejun, president of Guangdong Indel Enterprise Co, a Guangdong-based car-carried refrigerator manufacturer and exporter. "This is actually a good thing for Chinese manufacturers," Shi told the Global Times Thursday. The original equipment manufacturer (OEM) model - in which a company produces parts on behalf of other companies that then sell the finished product - has been common for a long time in Chinese manufacturing, particularly in southern coastal areas. But now, with the deteriorating external environment and rising costs, Chinese companies are scrambling for a higher position in the value chain. Indel, for example, has put a lot of effort into updating the functions of its products and improving their appearance, Shi said, and this means the company's exports to the US haven't changed much since the trade dispute broke out. "High-quality products will be welcomed by US customers with or without the tariff increase, because they can't find a replacement for those products very easily," Shi said.The US has launched several rounds of tariff hikes against multiple categories of Chinese products in recent months. On Tuesday, the US announced that it would impose 10 percent tariffs on $200 billion worth of Chinese imports starting from Monday, and the duties will rise to 25 percent from the start of 2019. The tariff hikes will be a blow for low added-value goods, but not for higher-end products, analysts said. "For example, if a product costs $200 for the consumer, but the Chinese maker only gets $5 out of it... this kind of cheap processing will be hit by the trade dispute," Liu Buchen, a senior home appliance industry analyst, told the Global Times on Thursday. Move away from OEM The government has been pushing domestic companies toward industrial upgrading for several years, and the trade dispute could be an "accelerator" for such reforms, experts said."The trade dispute causes the reforms to happen faster... and it helps clear the fantasy some people have that the old OEM model can continue," Cong Yi, a professor at the Tianjin University of Finance and Economics, told the Global Times Thursday. According to a Nikkei Asian Review report in August, some Japanese companies are shifting production away from China to defend themselves against higher US tariffs. Mitsubishi Electric said in a note it sent to the Global Times on Thursday that it is shifting US-bound electrical discharge machines and sheet metal laser processing machines from a manufacturing base in Dalian, Northeast China's Liaoning Province back to Japan. Cong stressed that this kind of shift is inevitable even without the trade dispute. "There's no survival space for China's processing trade," he said. "The only way is to launch reforms based on demand from domestic customers," he said.