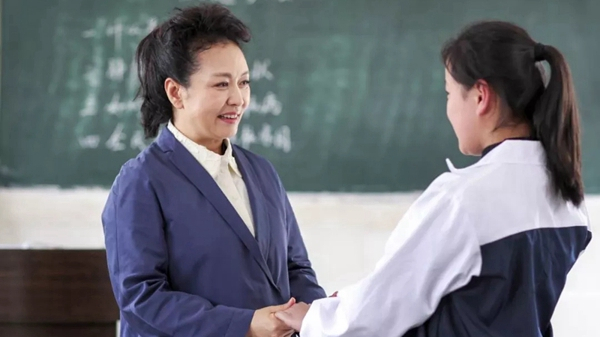 Professor Peng Liyuan, wife of Chinese President Xi Jinping and WHO goodwill ambassador for tuberculosis and HIV/AIDS, talks with a local student about TB prevention during her visit to Putuan village, central China's Hubei Province, on March 23, 2018. (Photo: CGTN)

Peng, who became World Health Organization's Goodwill Ambassador for TB and HIV/AIDS in 2011, shared her feelings and experiences with the attendees of the meeting, which took place in the UN headquarters in New York. She also shared the touching stories of the unsung heroes in China who have been selflessly dedicated to the cause of combating TB.

Peng, who is also China's National Ambassador for TB Control and Prevention, said that the control and prevention of the epidemic disease in China have made rapid progress and its victims are being diagnosed and treated more timely and effectively.

She also pointed out such progress has been made because of the great importance that the Chinese government and the entire society have attached to the cause as well as the enthusiastic participation of about 700,000 volunteers.

In some parts of China, TB prevention has become one of the key tasks in the government's poverty alleviation program, said Peng.

Now, China has seen continuous increases of case detection and cure rates for TB and decreases in morbidity and mortality, as many TB victims in the country have their lives renewed, said Peng, adding that the awareness rate of TB control and prevention knowledge has reached over 75 percent in China.

Thanks to joint efforts of governments, international organizations, NGOs, specialists and volunteers, the control and prevention of the tuberculosis epidemic on the global level have scored significant achievements, but mankind still faces severe challenges in the aspect, Peng said.

The World Health Organization has adopted the End TB Strategy, she said, urging all countries in the world to join hands and do their best to change the life of the millions of people who are affected by TB and end the global epidemic.

The high-level meeting was chaired by Maria Fernanda Espinosa Garces, president of the 73rd session of the UN General Assembly. A political declaration on the control and prevention of TB was endorsed by the meeting.