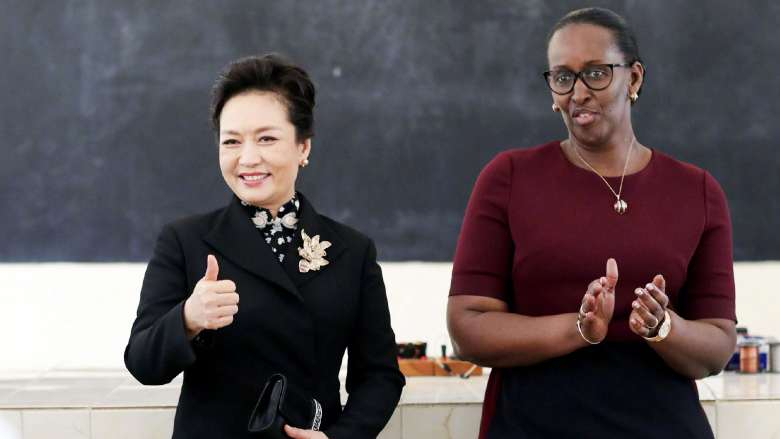 In a physics laboratory, Peng watched the students doing series and parallel circuit experiments. Then at a geography class, she was impressed by the students' good knowledge of China's geography and national conditions, and encouraged them to increase their understanding of China.

When entering the school's auditorium, the Chinese guest of honor received a standing ovation from all the hundreds of students present. With a keen interest, she watched students present a chorus of the school song, sing the household Chinese folk song of Jasmine Flower in Chinese, and perform traditional dances. The two first ladies also had a group photo with the performers.

Student representatives presented Peng with a handicraft as a gift, and she donated a batch of education supplies to the school.

Education is the basis for a country's development and the people's happiness, Peng said, adding that as both a wife and a mother, she sincerely hopes that all the children, especially girls, can get good education and enjoy equal rights.

She expressed her hope that China and Rwanda will strengthen exchanges and cooperation in education and nurture more contributors to consolidating their friendship.

FAWE Girls' School was named after the Forum for African Women Educationalists (FAWE). The boarding school enrolls students mainly from middle- and low-income families, and stands as one of the best girls' schools in Rwanda in terms of teaching standard and student performance.

Peng is in Rwanda accompanying Xi for a state visit, the first to the African country by a Chinese head of state.