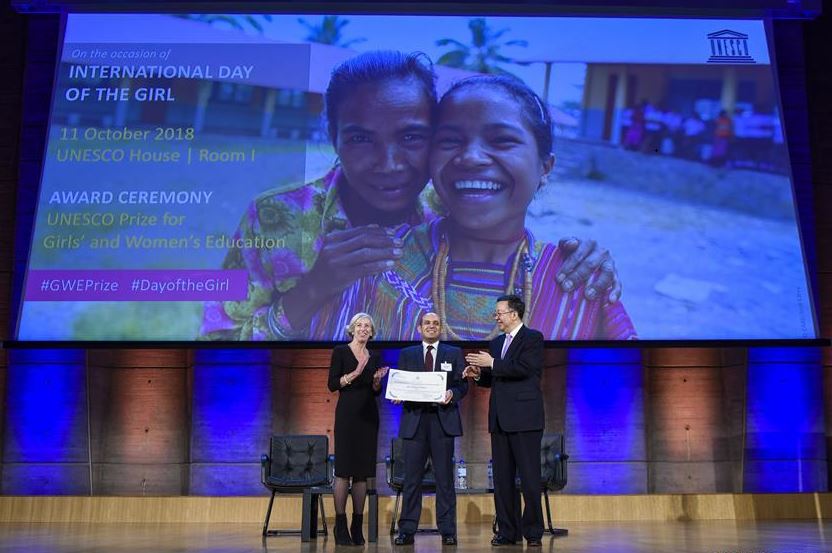 Chinese Vice Minister of Education and Director of the China National Commission for UNESCO Tian Xuejun (R), Deputy CEO of Misr El Kheir Foundation of Egypt Mohamed Abdelrahman (C) and UNESCO Assistant Director-General for Education Stefania Giannini pose for photos during an award ceremony for the 3rd UNESCO Prize for Girls' and Women's Education at UNESCO's headquarters in Paris, France, on Oct. 11, 2018

Peng paid respect and sent her best wishes to the laureates of this year's prize, the Misr El Kheir Foundation of Egypt and the Women's Centre of Jamaica Foundation.

Peng said in the message that girls' and women's education is a great cause that empowers girls and women with the same opportunities to achieve their potentials as boys and men. It is an essential part of, and an important means to, the United Nations Sustainable Development Goals 2030.

The UNESCO Prize for Girls' and Women's Education has played a unique and important role in encouraging more people to devote themselves to this great cause, Peng said.

She praised the laureates for their commitment to promoting equality in education and helping girls and women fulfill their dreams.

Peng said that, as the UNESCO Special Envoy for the Advancement of Girls' and Women's Education, she would like to work together with everyone else to support the UNESCO's gender equality global priorities and enable every girl and woman by giving them a chance to succeed and fulfill their dreams.

Proposed and sponsored by the Chinese government, the UNESCO Prize for Girls' and Women's Education is the first UNESCO prize in girls' and women's education.