Chinese State Councilor and Foreign Minister Wang Yi speaks during the general debate of the 77th session of the UN General Assembly at the UN headquarters in New York, on Sept 24, 2022. [Photo/Xinhua]

UNITED NATIONS - Chinese State Councilor and Foreign Minister Wang Yi on Saturday called on the international community to make every effort for peace and development, and shoulder the responsibility for solidarity and progress.

While delivering a speech at the general debate of the 77th session of the United Nations (UN) General Assembly, Wang said the world is at a time fraught with challenges.

The world has entered a new phase of turbulence and transformation, and changes unseen in a century are accelerating, Wang said, adding that this era, however, is also full of hope.

Peace and development remain the underlying trend of the times, and around the world, the people's call for progress and cooperation is getting louder than ever before, Wang said.

China's answer, Wang said, is firm and clear on how to respond to the call of the times and ride on the trend of history to build a community with a shared future for mankind advocated by Chinese President Xi Jinping.

First, countries must uphold peace and oppose war and turbulence, Wang said, calling on all countries to remain committed to addressing differences through peaceful means and resolving disputes through dialogue and consultation.

Third, countries must remain open and oppose exclusion, Wang said, adding that countries should stay true to openness and inclusiveness, uphold the multilateral trading system with the World Trade Organization at its core and endeavor to build an open world economy.

Fifth, countries must strengthen solidarity and oppose division, Wang said, calling on the international community to stand against drawing lines on ideological grounds, and work together to expand common ground and convergence of interests to promote world peace and development.

Sixth, countries must uphold equity and oppose bullying, Wang said, adding that countries should promote and practice true multilateralism, promote equality of all countries in terms of rights, rules and opportunities, and build a new type of international relations featuring mutual respect, equity and justice, and win-win cooperation.

China, Wang noted, as a permanent member of the UN Security Council and the world's largest developing country, is committed to boosting solidarity and cooperation with other countries, following the trend of the times and pursuing the shared interests of the vast majority of countries.

China, he said, has been a builder of world peace, a contributor to global development, a defender of the international order, a provider of public goods and a mediator of hotspot issues.

In the face of various challenges nowadays, Xi has proposed the Global Development Initiative, a rallying call to refocus attention of the international community on development and build a global community of development, Wang said.

On the Taiwan question, Wang stressed that since ancient times, Taiwan has been an inalienable part of China's territory. 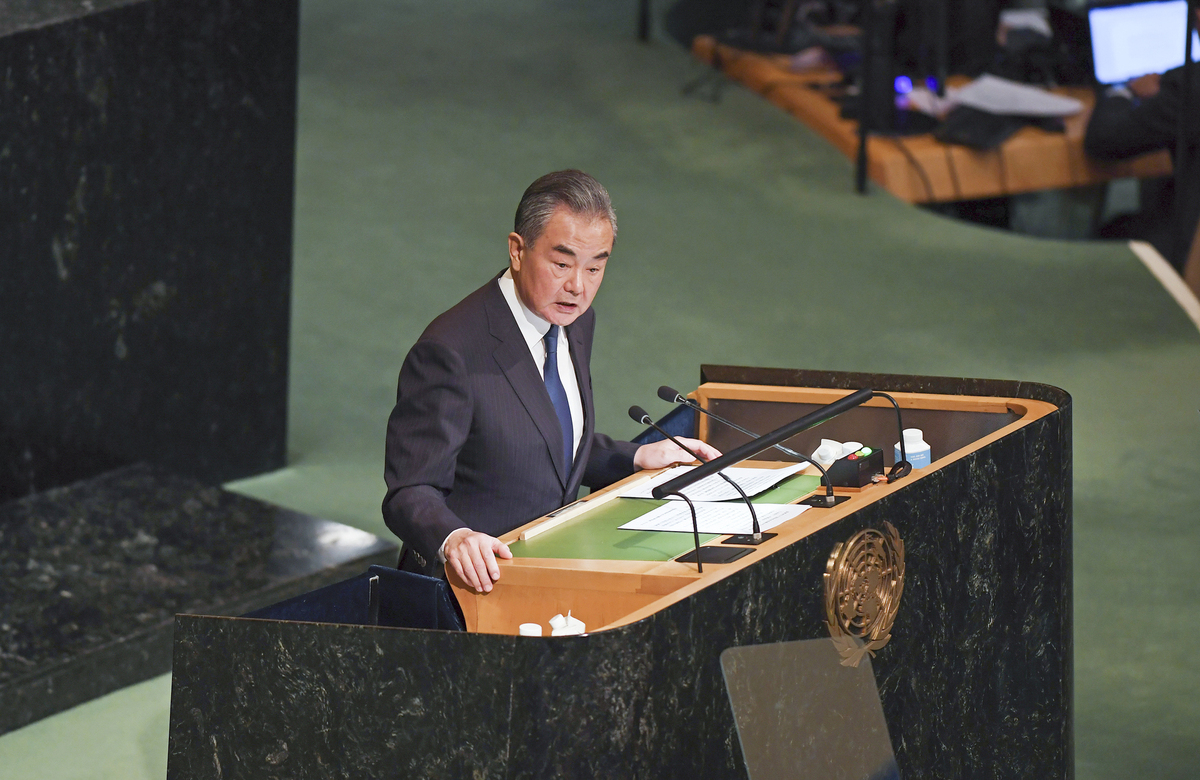 Chinese State Councilor and Foreign Minister Wang Yi speaks during the general debate of the 77th session of the UN General Assembly at the UN headquarters in New York, on Sept 24, 2022. [Photo/Xinhua]

China's sovereignty and territorial integrity has never been severed, and the fact that the mainland and Taiwan belong to one and same China has never changed, he said.

All of the Chinese have never ceased their efforts to realize China's reunification, he added.

The one-China principle, Wang said, has become a basic norm in international relations and a general consensus of the international community.

Fifty-one years ago, right in this august hall, the UN General Assembly adopted Resolution 2758 with an overwhelming majority, which decided to restore the lawful seat of the People's Republic of China in the UN and to expel the "representatives" of the Taiwan authorities from the place which they had unlawfully occupied, Wang recalled.

Once and for all, Resolution 2758 resolved politically, legally and procedurally the issue of the representation of the whole of China, including Taiwan, in the UN and international institutions, and it completely blocked any attempt by anyone or any country to create "two Chinas" or "one China, one Taiwan," Wang said.

China will continue to endeavor to achieve peaceful reunification with the greatest sincerity and greatest efforts, he said, adding that to realize this goal, China must combat "Taiwan independence" separatist activities with the firmest resolve and take the most forceful steps to repulse interference by external groups.

Only by resolutely forestalling in accordance with the law separatist activities can China forge a true foundation for peaceful reunification, and only when China is completely reunified can there be enduring peace across the Taiwan Strait, Wang noted.

Any scheme to interfere in China's internal affairs is bound to meet the strong opposition of all the Chinese, and any move to obstruct China's cause of reunification is bound to be crushed by the wheels of history, he added.

As China has one-fifth of the global population, its march toward modernization has important and far-reaching significance for the world, Wang said.

The path that China pursues is one of peace and development, not one of plunder and colonialism; it is a path of win-win cooperation, not one of zero-sum game; and it is one of harmony between man and nature, not one of destructive exploitation of resources, Wang said.

He added China will continue to contribute its input to meeting the challenges facing human development, and make its contribution to creating a new form of human advancement.

The Communist Party of China will convene its 20th National Congress in Beijing next month, Wang said, adding that this Congress will, in response to the expectation of all the Chinese people, set well-conceived goals and tasks for China's development in the next five years and beyond, and that it will draw an overarching plan for China's future development.

Having reached a new historical starting point, China will follow the Chinese path to modernization to achieve the rejuvenation of the Chinese nation, Wang said.

China, Wang said, will work with other countries to make every effort for peace and development, shoulder the responsibility for solidarity and progress, build a community with a shared future for mankind, and embrace an even better world.

On the same day, Wang also met respectively with the president of the 77th session of the UN General Assembly and the foreign ministers of Maldives, Egypt, Algeria, Gabon, Equatorial Guinea and Costa Rica.