NEW YORK, Sept. 28 (Xinhua) -- Chinese State Councilor and Foreign Minister Wang Yi said here on Friday the healthy and stable development of China-US relations is mutually beneficial and needs to be maintained with joint efforts from both sides. 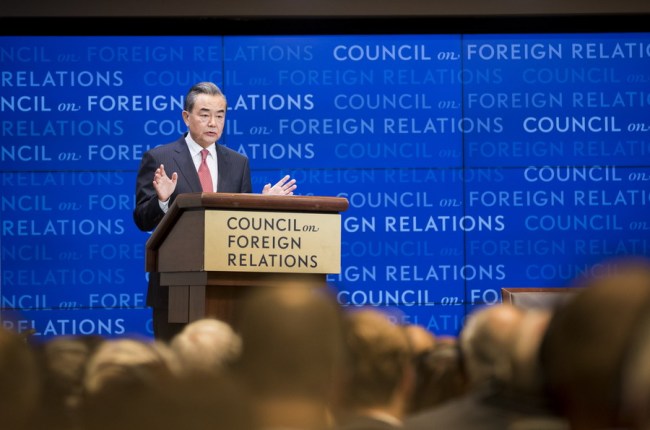 Chinese State Councilor and Foreign Minister Wang Yi speaks while meeting with Richard Haas, president of Council on Foreign Relations, a New York-based think tank, as well as other members of the council on Friday, September 28, 2018. (Photo: fmprc.gov.cn)

Wang made the remarks in a speech given at the US Council on Foreign Relations, a New York-based think tank.

Noting that China and the United States are going to usher in the 40th anniversary of the establishment of diplomatic relations, Wang said it is necessary to objectively examine the changes that have taken place in each other, calibrate the bilateral relations and have a good grip on the direction of their future development.

Thanks to the unremitting efforts made by several generations of leaders from both sides as well as the efforts of people from all walks of life in both countries, China-US cooperation has yielded significant results over the past 40 years, promoting respective development and benefitting people on both sides, said the top Chinese diplomat.

Wang noted that doubts, differences and even frictions may emerge as both sides interact more closely with each other and their interests are more intertwined. It is not surprising since the two countries have distinctive histories, cultures and social systems and are at different stages of development, he said, adding that there is no need to panic either.

However, some American friends believe that once China develops, it would seek hegemony, and even challenge and replace the US leadership in the world, Wang said, noting that this is obviously a huge strategic miscalculation.

Unfortunately, this misconception is spreading, which magnifies existing conflicts, creates new doubts and makes it more difficult and complicated for China and the United States to resolve specific problems, he warned.

Wang made it clear that China will take a development path different from that of a traditional power. This is a path with Chinese characteristics, which determines that China will not repeat the old path in which a strong power would surely seek hegemony, said Wang, adding that China will neither become another United States, nor challenge or replace the United States.

Emphasizing that China always adheres to the path of peace, cooperation and opening-up and endeavors to play an active and constructive role on the international stage, Wang called on parties concerned to shrug off prejudices and make a rational judgment. China-US relations are common assets of the two countries, which need care by and attention from both sides, he added.

Under the current circumstances, China-US relations are again at a crossroad, said Wang, adding that a better prospect can be achieved if the two sides take a positive and tolerant attitude towards each other, expand and deepen cooperation, and properly manage differences.

Wang also called on far-sighted figures from both sides to take concrete actions to maintain the healthy and stable development of China-US relations and jointly steer the bilateral ties in the right direction.