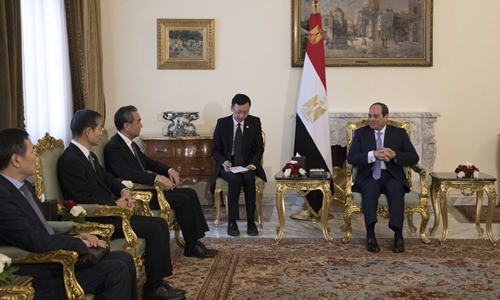 Chinese State Councilor and Foreign Minister Wang Yi on Wednesday called for promoting the China-Egypt comprehensive strategic partnership to a higher level with the aim of building a community of shared future in the new era.

Wang made the remarks during his meeting with Egyptian President Abdel Fattah al-Sisi in the Egyptian capital of Cairo.

As the long-term trustworthy friend of Egypt, China firmly supports Egypt in preserving its national sovereignty, independence and territorial integrity, adopting the development path matching its national conditions, and combating the terrorist and extremist forces of all forms, Wang said.

China also supports Egypt in its efforts to achieve national rejuvenation and play a bigger role in the international and regional affairs, the top Chinese diplomat added.

As the cooperation between China and Egypt grows in scope and depth, China has become the largest trading partner of Egypt, Wang noted, adding the Chinese investments in Egypt surged more than 60 percent in 2019.

China is willing to deepen strategic coordination with Egypt in a joint effort to uphold peace and stability in the Middle East, preserve multilateralism, fairness and justice, and safeguard the common interests of all developing countries, he said.

For his part, Sisi spoke highly of China's great economic and social achievements and the comprehensive strategic partnership between China and Egypt, while thanking the valuable long-term support China has provided to Egypt.

Egypt is willing to work together with China to promote the comprehensive strategic partnership to a higher level, Sisi said.

As a staunch supporter of the Belt and Road Initiative (BRI), Egypt hopes to become a key partner in promoting the Chinese initiative, the Egyptian president noted.

Being at a critical moment for its development and revitalization, Egypt hopes to strengthen win-win cooperation with China in different fields and enhance exchanges in the fight against terrorism and extremism, Sisi said.

The Egyptian president hailed the fair stance China has always maintained in the global affairs, while expecting China to play a more active and greater role in dealing with the current turmoil in the Middle East.