Chinese State Councilor and Foreign Minister Wang Yi said here on Tuesday that China and the the European Union (EU) should join hands to defend multilateralism and maintain international order. 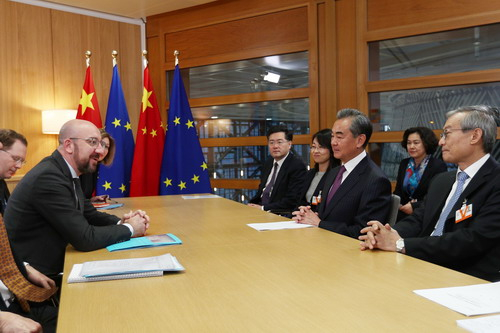 Wang made the remarks when he met with Charles Michel, president of the European Council, at the EU headquarters here on Tuesday.

Wang said that next year marks the 45th anniversary of the establishment of diplomatic relations between China and the EU, and the ties between the two sides will have new development opportunities under the new EU leadership next year.

As two major forces in the world's multipolarization, China and the EU should join hands to defend multilateralism and maintain international order. To this end, the two sides shall enhance the consciousness of partnership, he said, adding China and Europe are partners, not rivals.

China-EU cooperation will have more room and potential as China is pushing for further reform and opening up, said Wang, calling for reaching a high-level bilateral investment agreement as scheduled. The two sides should also strengthen mutually beneficial cooperation in innovation and digital economy, and avoid taking discriminatory measures against specific countries or companies.

Wang said that China's cooperation with the Central and Eastern European countries (CEEC) is an integral part of and a helpful supplement to China-EU cooperation. China is willing to make China-EU relations and Sino-CEEC ties facilitate each other through enhanced communication with the EU.

Michel said the European side believes that multilateralism and international cooperation is the best way to cope with current global challenges. China is playing an increasingly important role in the United Nations and the globe affairs. It is necessary for the EU and China to further strengthen dialogues, jointly maintain international order and rules, better cope with common challenges and threats, and give a new impetus to bilateral relations.

Michel said that the EU also believes that "17+1 cooperation" is an important supplement to the EU-China relations. The EU is ready to work with China to make full preparations for a series of high-level exchanges scheduled for next year, and to promote progress in the EU-China comprehensive strategic partnership.