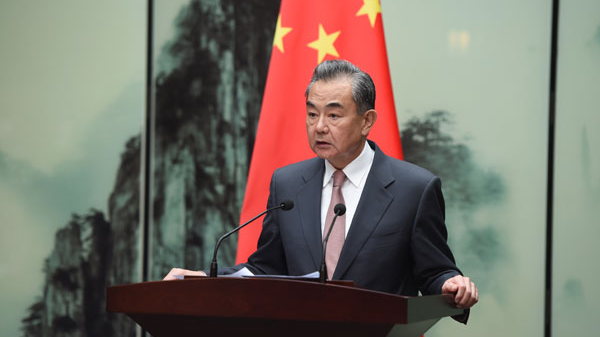 Acting Foreign Minister of the Afghan Interim Government Amir Khan Muttaqi was in attendance alongside foreign ministers and representatives of member states of the mechanism of coordination and cooperation among Afghanistan's neighboring countries.

"As neighboring countries to Afghanistan, we have witnessed tragedies and disasters caused by years of war and chaos to the Afghan people, and we have also experienced troubles brought about by the long-term chaos in Afghanistan. No country is more hopeful about the early realization of peace, stability, development and prosperity in Afghanistan than us," Wang said.

"After the previous two meetings of foreign ministers of the countries neighboring Afghanistan, we have expressed the shared view, demonstrated the unique role, and guided the international community's perceptions on the Afghan issue," Wang added.

He said that countries in the region should adhere to cooperation rather than confrontation, adhere to openness rather than isolation, treat each other as equals, and oppose bullying.

He said the international community should avoid neglecting the Afghan issue due to their attention to the situation in Ukraine, and should continue to increase investment in Afghanistan to help the Afghan people.

He said that the neighboring countries should fully implement the "Afghan-led, Afghan-owned" principle and work with the international community to support the Afghan people in creating a better future.

Muttaqi said that the United States has long undermined Afghanistan's political and economic sovereignty. He also spoke out about the U.S. hasty withdrawal from the country, which resulted in the destruction of facilities and huge consequences for Afghanistan.

Noting Afghanistan urged the United States to immediately lift the freeze on its overseas assets and unreasonable sanctions, Muttaqi expressed his hopes for the international community to provide support and assistance to Afghanistan.

All parties elaborated on their positions and propositions on the Afghan issue, calling on the Afghan interim government to be more inclusive, resolutely and thoroughly combat terrorism, and further protect the rights and interests of women and children.

Muttaqi said Afghanistan has reopened schools and students have returned to classes, adding Afghanistan has never stated that girls' education is prohibited. "There are a large number of women in all sectors of Afghanistan, including health care and education," he said.

It is hoped that the Afghan interim government will earnestly fulfill all the commitments it has made, Wang said, adding that it is believed that all neighbors of Afghanistan will continue to play a constructive role in the peaceful reconstruction of Afghanistan.