Chinese State Councilor and Foreign Minister Wang Yi expressed hope that the DPRK and the US move in the same direction, during a meeting with the DPRK Vice Foreign Minister Ri Kil-song on Thursday in Beijing. 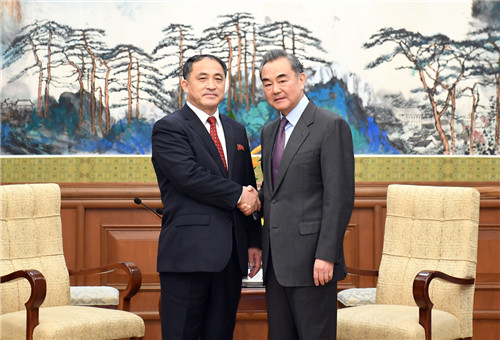 Wang said that the international community is highly concerned about the meeting that just concluded between the DPRK and the US leaders in Hanoi. Negotiations between the two sides have entered into a deep water zone and difficulties are inevitable, Wang said.

However, through dialogue, the general direction of the political settlement of the Korean Peninsula issue has been clarified, that is, to achieve the complete denuclearization of the peninsula and establish a peace mechanism on the peninsula. This important consensus reached by the DPRK and US leaders in Singapore meets the common aspirations of the international community, including the DPRK and the US, said Wang.

Wang said that it is hoped that both sides will keep firm in their convictions, maintain patience, continue dialogue, move in the same direction and work tirelessly toward the established goals. China is also willing to continue to play a constructive role in this regard. 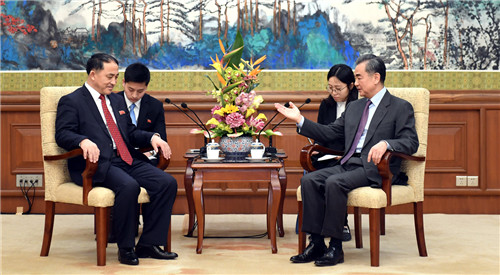 This year marks the 70th anniversary of the establishment of diplomatic relations between China and the DPRK.

Wang welcomed Ri to visit China to mark the 70th anniversary of the establishment diplomatic relations between the two countries, and to plan and design the commemoration along with the Chinese Ministry of Foreign Affairs.

Wang said that China and the DPRK should jointly implement the important consensus reached by the top leaders of the two countries on the development of China-DPRK relations in the new era, and take the opportunity of the 70th anniversary of the establishment of diplomatic ties to push China-DPRK friendly relations to a new level and open up new prospects.

Ri said that the DPRK is willing to work with China to take this important year as an opportunity to promote new developments of the two countries’ relations in the new era.