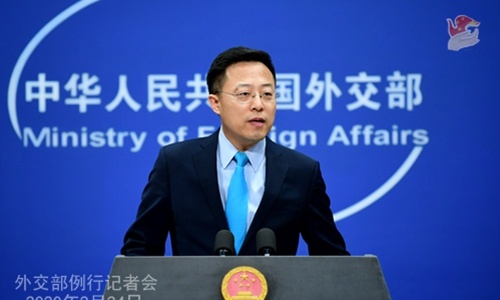 Foreign ministry spokesperson Zhao Lijian is making remarks at a press briefing on Feb. 24. (Photo: the Ministry of Foreign Affairs)

Chinese FM spokesperson Zhao Lijian on Thursday debunked the Australian Strategic Policy Institute's (ASPI) groundless lies about China, including satellite images of the so-called "detention camps" in Xinjiang which turned out to be office buildings and colleges, and noted that the international community will choose to stand with the truth.

Previously, an Australian media outlet published an article saying that the reports by ASPI and other institutions and scholars published in the name of so-called "academia and neutrality" are not based on facts and have no academic value at all, and have actually been producing and spreading false information.

"This is not the first time that media outlets unveiled the true colors of ASPI," Zhao said at a news conference on Thursday, "ASPI's behavior has been widely criticized by many, including Australian scholars, over a period of time."

However, the so-called satellite photograph is only an interactive map, and the "eyewitness evidence" was never confirmed or traced, Zhao pointed out.

The report also claims that there are "detention camps" in Turpan and Kashi in Xinjiang, which are actually an office building of the local administrative institution, local high schools and colleges and universities.

"They are all marked on Google Maps and Baidu Maps, which you can consult," Zhao added.

"The facts have amply demonstrated that ASPI is fabricating and spreading lies, rumors and disinformation in matters related to China," Zhao noted, "It aims to stigmatize and demonize China and damage China's image and interests.

"Credibility is the foundation of every man," Zhao said, quoting an ancient Chinese saying, "All of ASPI's fabricated information and malicious spreading of rumors will be continuously slammed by truth and facts."

More and more people from the international community will choose to stand with the truth, objectivity and justice and say no to lies, Zhao said.

Earlier in June, the Chinese FM slammed ASPI for spearheading anti-China forces and fabricating various anti-China issues after it released a paper claiming that China is strengthening its influence over the international community.

In July, sources said that China is considering suing Adrian Zenz and the Australian Strategic Policy Institute (ASPI) that have long published and disseminated disinformation about China for libel.

In September, China banned the think tank's analyst Alexander Joske, who has frequently published articles accusing Chinese universities of engaging in international cooperation for "military purposes," from entering the country.

Although ASPI claims to be an independent and non-partisan think tank, it is actually funded by the defense and diplomatic agencies of Australia and the US, as well as major Western military-industrial enterprises, Australian media reported.