China opposes the US' anti-democratic behavior under the banner of democracy, emphasizing that democracy should not be "privatized" by a few countries, China's State Councilor and Foreign Minister Wang Yi said during his virtual meeting with Hungarian Minister of Foreign Affairs and Trade Peter Szijjarto on Thursday, calling on the two countries to jointly safeguard multilateralism. 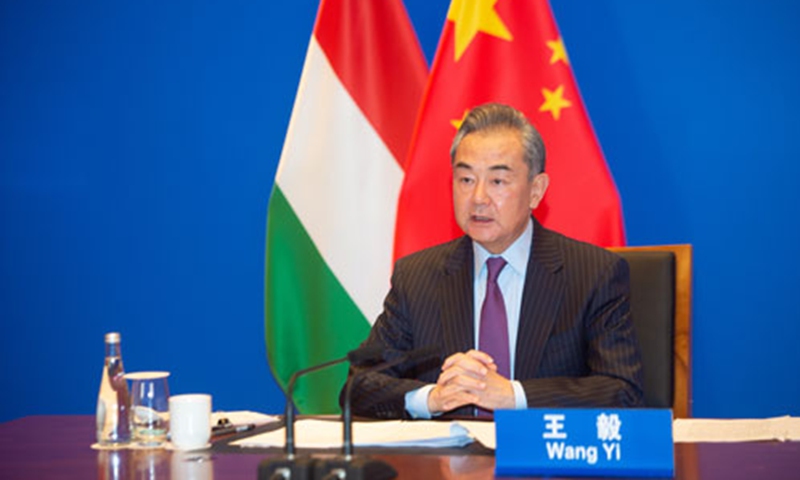 Wang reiterated China's stance on the US-led so-called Summit for Democracy, and said democracy is the right for people of all countries, not for only a few countries. Whether or not a system of government is democratic should be assessed by its people, not a foreign country.

Democracy is not a test sheet made by the US for other countries to answer. If countries are only permitted to measure their democracy against American standards, then that in itself is a betrayal of democratic principles, Wang said.

Wang also criticized US interference with other countries' internal affairs to serve its own political purpose under the guise of democracy. The US only proved its lacks of credibility by claiming not to support "Taiwan independence" while offering space for Taiwan secessionists in the international society, Wang said.

Wang also stated Chinese stance on Lithuania's recent provocations over the Taiwan question. The moves by Lithuania seriously violated the one-China principle and commitments it made when China and Lithuania established diplomatic ties.

Both sides hailed the construction of the Hungary-Serbia rail link, which is part of the China-proposed Belt and Road Initiative.

The two diplomats also exchanged views on relations between China and Europe. Wang said China and Europe are partners, not rivals, and that the areas of consensus between the two sides far exceed differences. He appreciated Hungary's rational and practical attitude on the topic, which is also in the interests of the EU as a bloc and European countries.

Szijjarto said Hungary firmly supports the development of Europe-China relations and will continue to play an active role in the cooperation between Central and Eastern European countries and China.