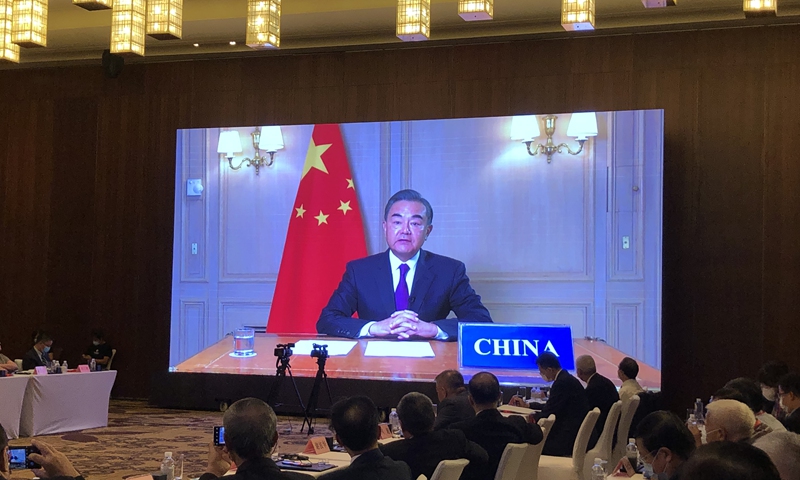 Wang Yi delivers a keynote speech via video at the international seminar on the 75th anniversary of the United Nations held in Beijing on Tuesday. (Photo: GT)

Multilateralism is the sole solution to world disturbances in which no country can stand by itself and the UN should and is able to play a core role, China's State Councillor and Foreign Minister Wang Yi said at an international seminar on the 75th anniversary of the United Nations in Beijing on Tuesday.

"The world's general trend of cooperation and win-win will not change. The bullying acts from countries like the US, including destroying international relations and rules and pulling the world back to conflicts and confrontation, are bound to fail," Wang said via video.

Wang noted that China will always shoulder the responsibility in the world that fits its national strength and support the UN.

This year marks the 75th anniversary of the founding of the UN.

The seminar, themed "Strengthening multilateralism for a better future," was organized by the UN Associations of China and the Chinese People's Institute of Foreign Affairs. A total of 130 participants, including former UN officials and scholars from China and abroad, attended the seminar, with some present  and others joining via video.

Nearly all the speakers raised the ongoing COVID-19 pandemic as a challenge to world order and international cooperation, and welcomed the role of the UN to sustain multilateralism.

Ban Ki-moon, former secretary-general of the UN, said via video that the UN remains the bedrock for international cooperation and the challenge for countries is to be united as a global community. He noted that multilateralism and partnerships are indispensable now more than ever.

Wu Hongbo, China's special representative on European affairs who served as UN under-secretary-general for economic and social affairs, pointed out a few factors that have shaken multilateralism.

"The number of countries participating in global governance has greatly increased. The global political pattern has changed significantly and economic globalization has met unprecedented challenges. Meanwhile, new technologies and industrial reforms bring new challenges. The UN order has been disturbed by strong powers with unilateral moves," Wu said at the seminar, adding that all countries putting aside different ideologies is the basis for cooperation and China-proposed 'a common destiny for mankind' fits the trend of human development.

In recent years, there have been discussions on whether the UN can sustain its role to promote multilateralism and international cooperation. The US, the world's sole superpower, has withdrawn from a number of UN bodies and even threatened to quit the international organization, which is seen as a blow to multilateralism. On the contrary, cooperation among Asian countries under frameworks such as the Regional Comprehensive Economic Partnership has gained momentum.

Ruan Zongze, executive vice president at the China Institute of International Studies, said at the seminar that the contest between multilateralism and unilateralism will determine the trajectory of world order.

"For the East, the UN is a 'sunrise' organization, while for the West, it is a 'sunset' organization," Kishore Mahbubani, a distinguished fellow at the Asia Research Institute of the National University of Singapore who served as Singapore's permanent representative to the UN, said at the seminar via video.

Mahbubani called on all countries to take care of the global boat as "COVID-19 reminds us that we are on the same boat."