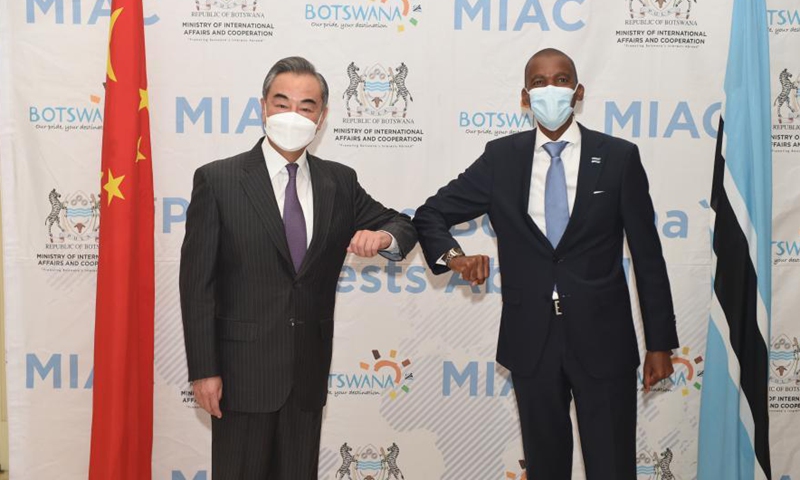 Wang said China-Botswana relations are based on mutual respect, trust, and support. China always maintains that all countries, big or small, are equal and China adheres to the principle of non-interference in each other's internal affairs.

He said a broad consensus on strengthening bilateral relations and promoting cooperation in various fields reached by the two countries' heads of state has played a strategic leading role in the development of China-Botswana relations.

China appreciates Botswana's reaffirmation of the one-China principle and will continue to support Botswana in safeguarding its national sovereignty, independence and territorial integrity, Wang said, adding that the two sides should cherish the sound situation of bilateral relations and deepen mutual trust.

Wang said that China is willing to continue to strengthen anti-epidemic cooperation with Botswana so that work on bilateral cooperation projects can resume in an orderly manner, and the fight against the pandemic can achieve victory.

Wang said Botswana will become Africa's 46th partner country in jointly building the BRI, and this has coincided with the 46th anniversary of the establishment of diplomatic relations between the two countries, adding that this is a symbol that will see the two countries deepen mutually beneficial cooperation that benefits the two peoples.

China is willing to promote cooperation with Botswana in agriculture, infrastructure, digital economy, and other fields, Wang said.

China will also work with Botswana to actively promote the synergy of the UN 2030 Agenda for Sustainable Development with the African Union's Agenda 2063, and enhance the voice of developing countries in international affairs.

On his part, Kwape said that since the establishment of diplomatic relations, the two countries have respected each other as bilateral relations have deepened continuously and shown a positive momentum of development.

He said that Botswana is willing to hold a meeting of the bilateral economic, trade and technical joint committee with China as soon as possible, and strengthen cooperation in agriculture, tourism, trade and human resources development so as to promote further development of bilateral relations.

The minister said he appreciated China's great support for the fight against the pandemic and welcomes more Chinese enterprises to invest in Botswana.

Botswana also appreciates China's positive role in safeguarding the international multilateral system and thanks China for its firm support for the African Union's Agenda 2063 and its important contribution to supporting Africa's medical and health undertakings within the framework of the Forum on China-Africa Cooperation, he said.