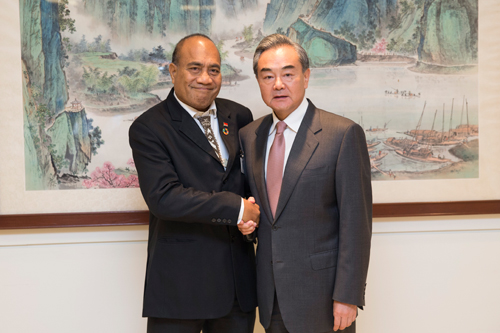 Photo: Ministry of Foreign Affairs of the People's Republic of China

During their meeting at the 74th session of the United Nations (UN) General Assembly, Wang said China highly appreciated Kiribati's statement last week, which acknowledged the one-China principle and declared its severance of the so-called "diplomatic ties" with the Taiwan authorities and restoration of diplomatic relations with China.

He said it is the "correct decision" made independently by Kiribati, adding that time will prove that the decision is fully in line with the fundamental and long-term interests of Kiribati and its people.

Wang said that Mamau, who paid a special visit to the Chinese Permanent Mission to the UN, once again sends a clear signal that Kiribati is willing to accelerate the process of re-establishing ties with China, adding China welcomes that.

He also said Kiribati is increasingly aware that the brotherhood and friendship with China is important for Kiribati's national development.

Mamau expressed the hope that Kiribati will restore formal diplomatic relations with China as soon as possible.