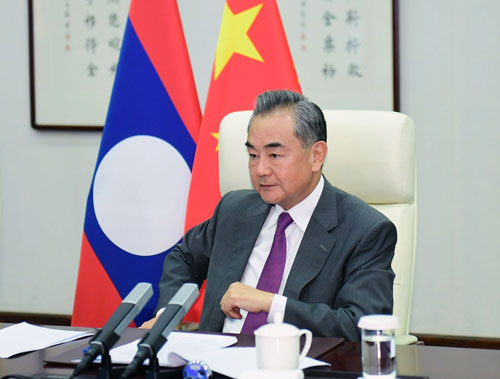 Wang said the two sides have helped each other in the fight against the pandemic and celebrated the 60th anniversary of the establishment of diplomatic relations this year.

He added that their bilateral trade has grown substantially, the China-Laos railway is nearing completion, and the community of shared future is full of vitality.

The two sides should continue to carry out celebrations of the 60th anniversary of their establishment of diplomatic ties and the Year of China-Laos Friendship to enrich the connotation of the China-Laos community with a shared future and pass on china-Laos friendship from generation to generation, Wang added.

Saleumxay said Laos is ready to work with China to push for new progress in the construction of the Laos-China Economic Corridor and ensure the opening of the Laos-China railway within this year to benefit the two peoples.