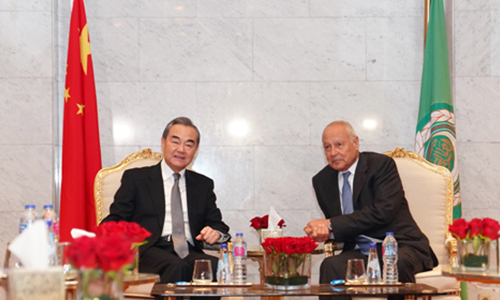 Wang stressed that China is a trustworthy friend of the AL.

China attaches great importance to the role of the AL, and appreciates the just and objective stance the AL has taken on important international and regional issues, Wang said, adding that China supports the Arab states in using the AL as a platform to deal with the current difficulties and challenges.

Wang noted that the China-Arab States Cooperation Forum (CASCF)has achieved fruitful results. He urged the two sides to take the ninth ministerial conference of the forum as an opportunity to make a common voice on the latest developments in the international and regional situation and be fully prepared to make the conference a success.

China appreciates the support the AL has lent on Xinjiang-related issues and welcomes Arab officials to visit Xinjiang to witness the results of China's anti-terrorism and deradicalization efforts, he said.

Gheit said the AL attaches great importance to its relations with China. He expressed the belief that all AL member states are willing to make joint efforts with China to explore the ways to build a China-Arab community with a shared future.

The eighth ministerial conference of the CASCF achieved important results, and the AL is willing to work with China to make the ninth conference a success, said the AL chief.

The AL fully understands China's stance in Xinjiang-related issues and opposes any interference into China's internal affairs, he said.

Gheit said the AL speaks highly of China's fair stance and contributions to the resolution of the hotspot issues in the Middle East, and thanks to China's steadfast support for the just cause of the Arab people, especially the Palestinians, to gain legitimate rights.