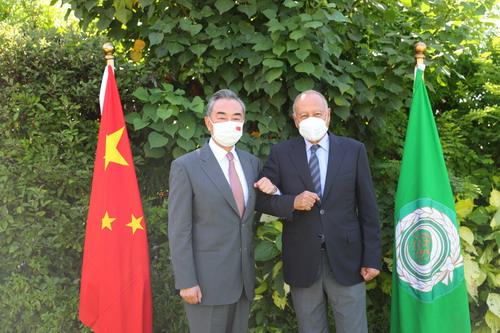 During the meeting, Wang said that Arab countries created splendid civilizations in history, and China sincerely hopes that they will continue to create new glories in the future.

China supports Arab states in pursuing a path of unity and self-improvement, taking their destiny in their own hands, said Wang, adding that China supports the AL to play a greater role in promoting regional peace and stability as well as political settlement of hotspot issues.

China is willing to work with Arab countries, implement the outcomes of the 9th ministerial meeting of the China-Arab States Cooperation Forum, and jointly build a China-Arab community with a shared future, Wang added.

Gheit congratulated the Communist Party of China (CPC) on its 100th anniversary and spoke highly of the historic achievements made by the Chinese people under the leadership of the CPC.

The Arab-China relations are very strong, and the AL hopes to further strengthen the ties with China, said Gheit. He also thanked China for providing anti-epidemic material assistance.